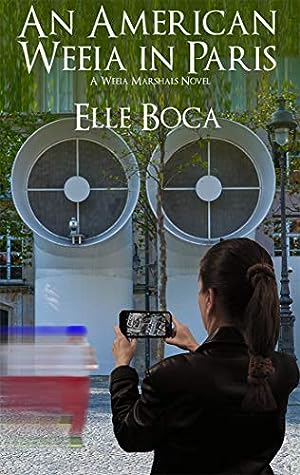 Boca continues to blend police procedural with the mystical, creating urban fantasy where magic can be both powerful and not the solution to problems.

This novel is the fourth in the Weeia Marshals series. Possible spoilers ahead.

When an apparent superhero foils an attack on the Eiffel Tower, Marshal Danni Metraeux finds herself trying to capture a Weeia who seems to love the spotlight while dodging those in the Marshals’ service who want to see her fail. Unfortunately, someone is also spying on one of her Weeia friends. Handling one risk of exposure in a city constantly watching for terrorist plots would be hard enough: how can she handle two without even the full support of her own service?

The book opens moments before the attack, with Danni at the Eiffel Tower on a routine—if irksome—bodyguarding mission, and heads almost immediately into action-thriller territory. While this immerses the reader in her attempt to get her charges to safety without exposing the Weeia to the humans in and around the site, it does mean the reader isn’t informed of the significant changes in the Paris Marshal’s office since the previous book. While Boca does provide this information once the situation has calmed slightly, the lack of it at the time might make certain of Danni’s decisions seem odd; for example, her decision not to contact her deputy because she doesn’t trust him occurs before the reader discovers that Sebastian, her charismatic and supportive deputy, has been replaced by an egotist with connections with in the Marshals.

In addition, Boca’s delivery of the changes is terse in places: Francois’ departure as head of the Paris office, his decision to put her forward as his replacement, and her appointment as acting head, for example, is dealt with in a few sentences. This both provides the reader with a large lump of facts all at once and weakens—or removes—the emotional resonance that could come from Danni achieving a situation that—based on the start of the series—is of huge personal significance.

While the power level of this novel (mystically and politically) is higher than that of previous volumes, it does fit Danni’s advancement and does build on matters from earlier books; thus, it does not feel an implausible escalation.

Boca also balances the vastly significant arcs with several entirely personal arcs regarding pet ownership and visits by friends. These both add lightness and provide a pleasing contrast with the emotional weight of international manoeuvring.

Danni remains a sympathetic protagonist, caught between awareness of her limitations and pressure to do everything flawlessly. After a while in Paris, and among Parisian Weeia, her concern for dressing the part has lessened; however, her narration is still filled with descriptions of people’s clothing.

The supporting cast remain nuanced and realistic, and—unlike some ongoing fantasy series—free from the shift from “obnoxious obstacle” to “misunderstood friend”.

Overall, I enjoyed this novel. I recommend it to readers seeking urban fantasy that isn’t a retread of classic mythical creatures.