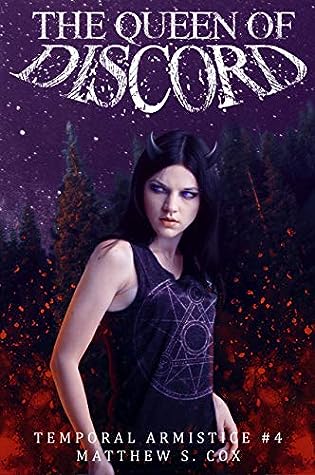 Cox continues to blend innovative perspectives on the possible impact of magic on society and technology with nuanced portrayals of human nature, creating urban fantasy that will appeal equally to action junkies and metaphysics addicts.

This is the fourth volume of Cox’s Temporal Armistice series.

Not using one’s unique ability to destroy the universe has to be the easiest way to be a hero ever; which is convenient, because Brooklyn Amari really enjoys lounging around. Unfortunately, while her outlook isn’t utterly human, she does have morals; so, when news report a giant lightning-spitting bird attacking industrial sites across the nation, she can’t dismiss it as problem for magical animal control; and when her next-door-neighbour disappears, she can’t just eat junk food. More unfortunately, the faction that wants the universe destroyed are more than happy to take advantage of her drive to protect the innocent.

As with previous volumes, Cox blends unique entities and powers with classic urban fantasy tropes to portray a world where common magic has replaced much of technology but not changed the fundamental nature of humans. This grants the story a pleasing feel of familiarity while retaining the ability to surprise.

Cox, echoing Blake in structure if not in convolution, weaves personal-, human-, and existential-level events into a coherent whole. This skilfully balances the intimacy of character with the special effects of multiverse-scale magics.

While Brooklyn’s suspicions about the industrial fires build on an event from the previous book, this book provides a complete (and complex) magical investigation arc, allowing readers to enjoy it without needing detailed recall of previous volumes.

Brooklyn’s investigation of her neighbour’s disappearance is similarly an entire magical vigilante arc rather than a segment of a longer tale.

Even the machinations of those who wish Brooklyn to end the world (or wish to ensure she cannot) commence with a new strategy and reactions to it, providing a fast-paced action thread that is more than merely supra-human fight scenes.

However, while Cox does provide reprises of key details (plausibly triggered by events or a need to update someone), Brooklyn’s limitations, assets, situation, and motivations are effects of three books worth of complex causes; as such, readers unfamiliar with the previous volumes might not experience the nuances of this novel.

As with all of Cox’s books, this one is filled with skilfully tailored humour—in this case, the snark and prankishness of a mostly moral “demon”—that readers are likely to find pleasing both for itself and for its enhancement of the more serious parts of the book.

Brooklyn remains a sympathetic yet plausibly inhuman protagonist. With the surprise of her true nature and appearing abilities now past, she can no longer avoid the question of what she should do with her life and the realisation that responsibility is harder than it seems even if you have great power.

Cox’s characterisation of the supporting cast displays a similar grasp of unique viewpoints and common experiences that allows for characters of vastly disparate ages and backgrounds who seamlessly inhabit the same world and narrative.

Overall, I enjoyed this novel greatly. I recommend it to readers seeking urban fantasy with depth and character.