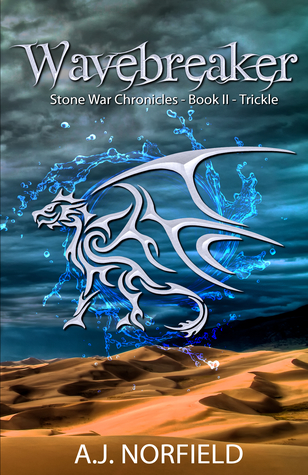 This novel is the second in the Stone Wars series. Possible spoilers ahead.

Raylan, Galirras, and the other survivors of the mission into the Dark Continent have managed to escape ahead of the Stone King’s army. However, they potentially only have days to warn their homeland, and no consensus on the best way to do it. Meanwhile, hundred’s of miles south, another of the Stone King’s armies destroys Trista’s village, driving her and her brother into the wilderness and into the hiding place of a dragon’s egg on the verge of hatching.

Norfield weaves three main threads together: the ongoing tale of Raylan and Galirras, Trista’s attempts to get her brother to safety whilst bonded to a freshly hatched dragon, and High General Corza Setra’s invasion of an island kingdom for the Stone King; in addition, minor threads following other characters are scattered throughout. This combination of two different escape plots with a military/espionage plot in another part of the world balances a feeling of world-affecting events with the intimacy of a personal narrative.

However, as these threads do not rapidly intersect, this also results in each narrative being interspersed with sections of unrelated events. While Norfield does not gratuitously shift threads, some readers might find some transitions occur a little too soon; or, conversely, that the transition back to one of the threads is too slow. This issue of balancing the narrative is especially noticeable in relation to Trista’s story: as a new character in a new part of the world, her viewpoint requires more set-up than established characters; however, obviously comes at the cost of the other two narratives, potentially leaving some readers who were avidly seeking more of the character’s and plots from the previous novel feeling underserved in places.

Taken as individual narratives, the three main threads are each an interesting and plausible gritty fantasy tale, and—although they do not intersect—events of one do provide background and additional perspectives on the others. Thus, readers who do feel not all the transitions are perfect are still likely to find all the narratives are equally engaging.

As might be guessed by this novel featuring Wavecatcher in its name, the newly discovered dragon displays a growing connection to water that parallels yet contrasts with Galirras’ influence over air. This both allows for a second dragon-human bonding arc that is plausibly similar to that of Windcatcher without being a mere repetition, and creates a new set of benefits and challenges.

This novel is the first half of Wavecatcher. As such, it leaves several major arcs unresolved and ends on somewhat of a cliff-hanger. However, each of the arcs reaches a significant milestone at the end of the book, so the effect is no stronger than that produced at the end of a middle volume of many epic fantasy series.

Raylan and Galirras are consistent with the previous volume, their growing bond and experience granting them more power and mutual support to face challenges, but also amplifying their issues with accepting the authority of others rather than doing what they think is right.

While Trista is an adult who cares deeply for her family, she lives with her parents and has not yet abandoned her teenage mindset. Thus she has the feel of a young adult protagonist, sympathetic enough that readers will want her to succeed rather than perish but with an absolutism and self-interest that might cause some readers to groan at the minutae of some decisions. This inexperience of being the adult in a situation is exacerbated by both her younger brother and the dragon believing they should be the focus of her attention.

Corza remains, while morally abhorrent, a complex villain rather than a pantomime one, many of whose challenges come from equally—if not more—unpleasant people. Thus, although readers are unlikely to root for his overall success, they might hope for his triumph over others in the Stone King’s army of conquest or enjoy the strategic skill he displays.

The supporting cast, returning and new, also possess a plausible balance of skills, flaws, and internal conflicts, combining the accessibility of fantasy tropes (such as the soldier unexpectedly thrust into leadership) with an individuality that provides both interest and a sense of a wider world.

Overall, I enjoyed this novel. I recommend it to readers seeking fantasy that provides classic tropes without feeling generic.

I received a free copy via a community seeking fair reviews for books.