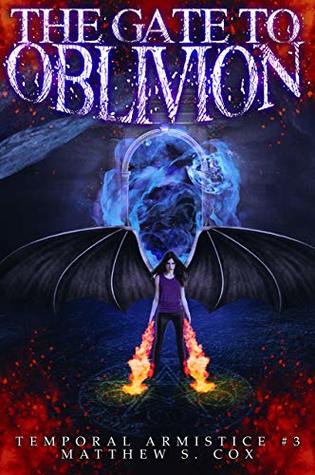 Cox blends ancient magical entities with the demands of modern urban life to create a vision of a world where magic is as ubiquitous and mundane as technology is in ours; and just as prone to misuse and malfunctions.

This novel is the third in Cox’s Temporal Armistice series. Danger of psychometric backwash ahead.

Brooklyn Amari has managed to keep her extraplanar ancestry hidden from—almost—all her friends and colleagues, allowing her to keep her job as a firefighter. However, after her involvement in clearing up a couple of “weird” cases, the Arson Investigation Unit do know about her psychic powers; so when a case of spontaneous combustion looks more inexplicable than usual, she is drawn into the hunt for a possible mystical arsonist. Unfortunately, an extremist group who want to restart a war from before time attempt to pressure her into destroying the world instead.

Cox continues the blend of mystical investigation, fast-paced action, and supernatural alternatives to real-world events and technology that filled the previous two volumes. As before, the world is a clearly different one from our own rather than a modern US city with fantasy creatures and mages living in it; in this volume that includes the severe impact of Thunderbirds and other First Nations spirits on air travel and the resulting portal-based alternative.

The spontaneous combustion mystery is a skilled balance of using magical advantages, imperfect assumptions, and encountering the same need for proof that mundane investigators slam into even when they “know” what happened and who did it. This is further complicated by Brooklyn being a firefighter not a cop, so she is both lacking in powers to compel answers or enter locations, and exposed to a great many fires that could be a magic user committing arson.

In parallel with this, those who seek a resumption of the war between the extra-planar realms have allied to pressure Brooklyn into destroying reality; and some who seek to prevent her have committed to preventing her at all costs. Thus, both her work and day-to-day life are disrupted by schemes or outright assaults, obstacles that sorely test her ability to conceal her true self from the city’s authorities. As well as portraying exciting struggles between powerful beings, Cox provides commentary on the absurdity of warmongers allying with their enemies to start a war, peace seekers attacking the things that make the prophesied destroyer’s life something they enjoy, and battles for reality ignoring the majority of the universe.

Cox, as ever, leavens the seriousness with humour. Embracing magic-as-normality, he provides more examples of in-world fantasy about worlds without magic and sorcerous tools that have niggling malfunctions. He also mines the rich vein of parents having had a life when they were young.

The plot overall weaves ongoing threads from both Brooklyn’s life and her role as potential ender of existence with arson investigation and things that seem out of the ordinary but are not concluded. While this does give the book the distinct feel of a mid-part in a series, Cox’s solid internal arc provides a clear sense that this is an entire episode; thus the unresolved things feel more like evidence of a wider world seen by someone with reason to be suspicious than dangling threads.

Brooklyn remains an engaging protagonist. As before she is moral rather than law-abiding, with a solid reason not to stand out too far from the crowd; thus her use (or choice not to use) her powers to solve issues is a mix of selfishness, vengeance, and altruism that is likely to seem both plausible and reasonable to readers even if her behaviour in any one situation is not what a reader specific reader would consider right.

The supporting cast are similarly nuanced, displaying complex moral perspectives and engaging desires that both contrast with Brooklyn’s choices and render them extremely plausible.

Overall, I enjoyed this novel greatly. I recommend it to readers seeking urban fantasy that embraces the way the magical becomes the normal soon after it becomes commercially available.