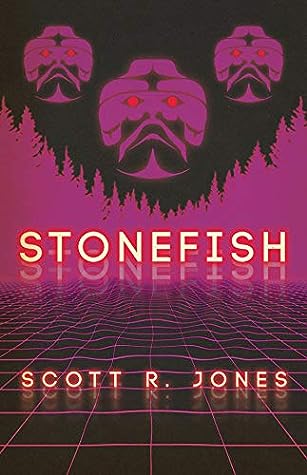 Years ago, tech mogul and futurist guru Gregor Makarios disappeared completely from public record. However, Den Secord, a journalist for a minor virtual reality publication, finds a fragment that somehow escaped the purge. Following a hunch that Makarios has returned to his teenage obsession with cryptids, Den travels to the northern edge of civilisation. There he finds his instincts were both right and entirely wrong. He has his story, but can he face sharing it with the world?

Jones utilises the framing mechanic of Den writing his thoughts and experiences after his investigation is over, and cutting in short pieces he wrote after some of the events. Thus it is never in doubt that Den survives or finds something significant. However, Den does not immediately confirm what that something is. While both confirmation of survival and hinting at revelation can be irritating if mishandled, Jones uses them to create a dramatic irony in the reader’s mind that imbue events with a tension at odds with the mundane calm of contemporaneous descriptions rather than to assure or tease the reader. The format of baiting lede followed by building to conclusion also mirrors that of an article, supporting the characterisation of Den as a journalist.

The story is set in some near future when artificial intelligence and virtual reality have been created but civilisation has collapsed inward into online interaction and genteel decay rather than surging upwards into a bright technological future, a world where journalists use Ganzfeld tanks to imbue articles with sensory experience rather than writing them. This presents as two parts separation from our roots to one part satire of modern tech entrepreneurship.

Jones’ skilfully portrays the isolation of a society that has immersed itself in technology: pervasive virtual reality has made it easier to meet people or experience events online; and advances in materials technology have allowed decaying sites of significance to be replaced by self-repairing “ruins” that are identical to the senses. Thus, the reader unconsciously feels part of a world that isn’t real. This creates a powerful sense of dread yet denies the reader a specific problem to hang their dread upon; a sense that amplifies the natural human uncertainty of the wilderness outside civilisation where much of Den’s search occurs.

The allusions to current tech entrepreneurs are likely to divide readers. Thinly veiled references to famous eccentric businesspeople on the cutting edge do both provide a counterpoint to the growing horror that enhances by contrast, and add an archness to the narrative that fits the superficiality and fluidity of a world lived in simulated experiences. However, Jones appears to divide real-world character into more than one fictional analogy; thus, some readers might find their immersion broken by dissonance between their identification of a fictional character with a real person and that fictional character not being the one who performed a well-known part of the real person’s life story.

While this novel is centred on the psychological experience of reality not being as one thought, Jones does not shy away from the physical. Instead, the visceral is another feed of data, presented with the same hyperreality as simulation. This both grounds the more philosophical aspects firmly in reality and undercuts the unconscious certainty that our bodies are an anchor. However, it does also add a body horror element that might not be to every reader’s taste.

Jones’ evocation of vast and alien beings outside our own illusion of significance is superb, allowing the reader to experience rather than merely intellectually know the central truth of gnosticism. Whether this will also resonate with fans of cosmic horror is likely to depend on how strongly they crave incomprehensibility and indifference in their Outer Gods.

Den is a sympathetic narrator. Both his immersion in a society where uber-rich tech moguls can do amazing things easily and his curiosity as a journalist make it extremely plausible that he ignores his own growing uncertainty in favour of getting the story. In addition to allowing Jones to take the reader deeper into the inhuman, this slowly builds a sense of acceptance that verges seamlessly into complicity with the inhuman.

While a clear eidolon of Reclusive Futurist Guru, Makarios is also a nuanced character struggling with his connection to Other, and his conflicting drives to seek human company and spare others the same exposure he has.

Overall, I enjoyed this book greatly. I recommend it to readers seeking horror that avoids indescribability without losing mystery.