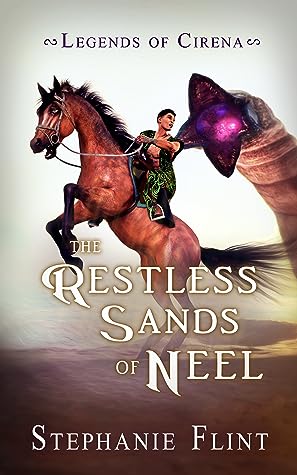 Ro’nor is a scryer, a gift that lets him make a tolerable living predicting weather for farmers and other mundane tasks. However, when a young beastman fleeing desert raiders leaps into Ro’nor’s cart and scares the horses, the scryer finds himself careering into town then hurled through the air. With the bills for healing and property damage not just wiping out his potential profits but eating into his reserve, the sensible thing would be to find work. But the young beastman claims the raiders have kidnapped his mother; and all the townsfolk seem to think it’s Ro’nor’s problem.

Flint’s conjuring of a segment of the world, its cultures, and its local flora and fauna is skilful, balancing including characterful details with avoiding extended discussions of, to the characters, normal things.

One touch that immediately enhances the sense of realism is that Ro’nor and the beast-child don’t speak the same language; this implies that there are many cultures and the world is large enough that there isn’t a single language that is common to all. This also adds risks both that Ro’nor’s belief about the child’s situation is—whether through the child seeking to mislead him or not—wrong, and that the impromptu rescue mission will be foiled by the loss of an interpreter.

In common with many fantasy tales, this one contains a significant number of in-world words and phrases. Rather than including asides and explanations for all of these, Flint includes a glossary at the end of the book. This allows the narrative to focus more on plot, both increasing the sense of drama and avoiding the risk readers who are already familiar with the book will find repetition of common facts tedious. However, while it might be easy to flick back and forth in a paperback, the lack of reference hyperlinks in the ebook mean that looking up a term and returning to one’s place could prove an immersion-breaking effort on certain ereaders; this issue is exacerbated by the glossary not being in perfect alphabetical order.

Ro’nor is an engaging protagonist, but might not be to every reader’s taste. Flint’s choice to open with him being charged considerable sums for something that wasn’t his fault is likely to arouse sympathy, a sympathy that is sustained when he chooses to assist the beast-child despite it risking further costs. And his lack of great magics, elite martial background, or prophesied destiny add a sense of heroism that would, ironically, be lesser were he an actual hero. However, a significant number of challenges are solved by other characters rather than by his efforts. Thus, he will seem either an ordinary person who acts as the glue helping hold an impromptu team together, or a somewhat passive supporter of other’s victories depending on reader’s tastes.

The supporting cast are plausible for the setting, with townspeople being mercenary without being malicious—as fits those who have succeeded in gathering resources in a desert. The young beast-man is recognisably a child, and thus immature in his presentation and accessible to the reader, without being immature to the point of irritating the reader or completely losing the sense of otherness that comes from being a different species.

Overall, I enjoyed his novella. I recommend it to readers seeking a short but dramatic fantasy tale that doe not lack a sense of a larger world.

3 thoughts on “The Restless Sands of Neel by Stephanie Flint”