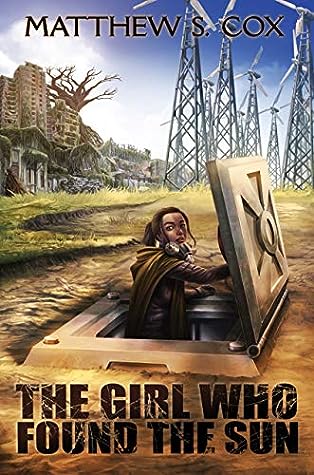 Cox takes the familiar post-apocalyptic tropes of survivors huddling in a bunker, failing technology, dystopian government, and possible conspiracy, and weaves them with nuances of his own to produce a tale that is fresh yet familiar.

As toxins devastated Earth, a few survivors withdrew to the Arc, an underground sanctuary. The computers which stored much of humanity’s knowledge and history failed generations ago, but tales speak of alien invaders poisoning the surface leaving an environment that will kill a human in hours. One of a small team struggling to keep the Arc’s machinery running, Raven Wilder knows that the ability to manufacture replacement parts has been lost; however, she also knows that her father claimed to have visited the surface and returned several times. Unfortunately, those in charge dismiss both her warnings that the Arc’s air supply has passed the point of failure and her belief that drawing air from the surface is the only way to survive.

While there are—plausibly enough for a society that built a sealed underground community—mentions of technology more advanced than our own, either it has failed or the knowledge to run it has been lost. Instead, Cox opens with mechanical and electrical engineering situations that feel entirely a product of current technology and human ingenuity. This creates a solid sense of a realistic world that make the speculative aspects feel plausible by implication.

This powerful image of a society that withdrew centuries ago, struggling to sustain even critical systems also provides an entirely mundane reason for the strict control and lost past that prevents readers from immediately accepting that those characters who see possible conspiracy are right.

As Raven learns more, both about the Arc and the surface, her conclusions and hypotheses remain only one of several plausible truths; and her theories are sometimes proved wrong.

Thus, while no story is guaranteed to seem free of the implausible to every reader, Cox skilfully creates a post-apocalyptic tale about judging the lesser of two dangerous options rather than Fallout-style whackiness or young-adult revolution against a corrupt administration.

Although this is a tense thriller, Cox does include his trademark leavening of humour: in this case, driven by dramatic irony as characters create incorrect theories about past events or places that are easily recognisable to readers. As with Cox’s other mature works, this humour is both seamlessly integrated and of a suitable tone to emphasise the seriousness of situations by contrast rather than disrupt them.

Raven is an highly sympathetic protagonist: the same innovative nature that makes her a good repair person for a collapsing bunker makes it plausible that she would argue against the social order; while, her clear sense of duty toward the rest of her society counters this lack of orthodoxy preventing her from seeming callous or immature. However, her greatest motivator and her greatest obstacle is her love for her young daughter: environmental collapse in the Arc will harm the youngest first, but even if the surface isn’t immediately lethal it almost certainly isn’t safe for children.

As with all of Cox’s novels, the supporting cast are nuanced and complex, each displaying realistic and conflicting motivations and beliefs.

Overall, I enjoyed this novel greatly. I recommend it to readers seeking post-apocalyptic drama that is driven by character and science rather than stylised gangs or simple moral binaries.