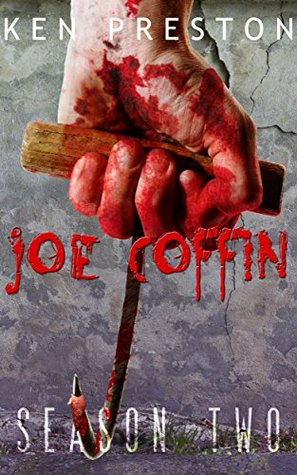 This book is the second in Preston’s Joe Coffin series.

The vampire behind the loss of Coffin’s family has been destroyed by Coffin’s hand. However, the Slaughterhouse Mob’s club is still in the hands of vampires—now lead by Coffin’s ex-wife—a situation Coffin is ordered to end. Unfortunately, the police are looking for Coffin, and they aren’t likely to accept “destroying vampires” as justification for his actions. Meanwhile, Emma both wants to help end the vampire menace and scoop the real story, but doing that requires following Coffin further outside the bounds of respectable society.

Picking up from the moment the previous season ended, this novel continues in the same brutal and gritty tone as the first. The cause of Coffin’s family life shattering has finally been killed, but—particularly with both Coffin’s wife and his son risen as vampires—vengeance has not ended the pain or solved the bigger issue of vampire infestation; and, although Coffin’s methods are effective, they’ve left a trail of criminal investigations that lead straight to him.

Preston takes the ongoing threads in several directions: Coffin’s efforts, both through hatred of Stephanie, his former wife, and through loyalty to Mortimer Craggs, to recapture the gentleman’s club; Coffin’s attempt to capture his now-vampire son in hopes of a cure; and Emma’s struggle to assist in vampire killing and get the story without burning all her bridges. He also adds a new thread of a military contractor hunting his son’s killer, that—while the quarry is likely to be obvious to most readers—remains tense. Interweaving against a realistic background of Birmingham’s grimier areas, these blend classic gangster thrills with bloody vampire horror.

As in the first season, the difference between gangsters and vampires is one of ultimate capability rather than morality: most of the humans are limited in their brutality by their biology rather than their decency, and the vampires display the same loyalty—if not more—to their group as any “honourable” gangster. This places the reader in the potentially uncomfortable position of choosing which drain on society to root for.

Preston’s take on vampirism remains similarly gritty and personal rather than tidy and objective. Although the events of this book do maintain a relatively consistent level of vampire ability and shed light on the reasons for this vampire infestation, they—as might be expected from a middle book in a series—also leave a few matters unexplained.

While the focus on brutal action over introspection ramps up the tension, it does also strip down most reminders of past events to inferences or fragmentary mentions. As such, this book is unlikely to be accessible to readers not familiar with the previous volume.

Like the first season, this one is divided into several episodes. Again, these do have an internal arc, so could be treated as suitable break points, but do not mark clear divisions within the narrative. In contrast, the novel as a whole has a clear transition from opening challenges to mostly resolved issues. Thus, although this book could be read as a season of a TV series (one of Preston’s stated influences), most readers are more likely to experience it as a single book in a series of novels.

Coffin remains a sympathetic enough protagonist. Having come to accept vampires himself, his challenges for this book are coping with the disbelief of others or their refusal to accept the scale of the threat, and with his desperate hope that his son can be saved rather than being put down. Readers who enjoyed the last book are likely to be pleased that his experiences have not led to him becoming a “better” person.

Emma is similarly sympathetic, providing a contrasting non-gangster viewpoint on events. This both amplifies the sense that the Slaughterhouse Mob are merely a different threat to society and allows Preston to mostly focus on the immediate action of gangster vs. vampire without the reader forgetting that the vampires are a threat to everyone. Her continued association with Coffin also provides an engaging perspective on when observing events becomes complicity.

The supporting cast are each a pleasing balance of sturdy trope and characterful nuance, both tainted by flaws and displaying plausible reasons for them.

Overall, I enjoyed this novel greatly. I recommend it to readers seeking a tale of modern vampire hunting that focuses on the danger rather than the romance.