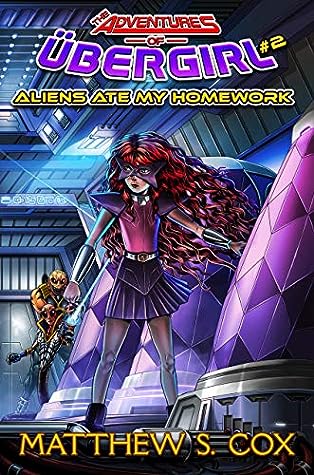 Cox blends pre-teen perspectives on life, classic superhero tropes, and several varieties of humour to create a tale that appeals both as straight middle-grade action and subtle homage.

This novel is the second in The Adventures of Übergirl series. Proceeding past this point might induce post-cognative visions.

When Kelly Donovan was one of the people to gain superpowers from Nolmek crystals, she thought her biggest problem would be her parents becoming supervillains; instead she discovered the Nolmek intended to transform humanity into more durable slaves. Unfortunately, the Nolmek solved nearly all humanity’s problems so no one would listen to her even if she weren’t only nine. Even worse, the Nolmek know that she knows and they seem to be accelerating their scheme.

As with the previous volume, Cox reframes classic superhero tropes through the lens of a pre-teen comic fan. This results in fast-paced action that is both clean and accessible for middle grade readers with a vein of more self-aware humour that will engage mature audiences.

Perhaps ironically, Cox’s great success at recasting the genre for a pre-teen audience also results in the most likely reason some adult readers might not enjoy all of the book as much as the first: the intersection of humorously gross bodily functions and superpowers; while it is not the core of the book, a significant subplot revolves around snot.

For those readers who look beyond—or even enjoy—body humour, this novel offers a second instalment of Cox’s blend of middle-grade problems and superheroic issues. With both Kelly and the world more used to superheroes, these focus more on long-term or ongoing dilemmas such as whether school rules apply while in costume.

As with the previous volume, the world is also salted with oblique references to real world companies and events, which are likely to provide a pleasing sense of amusement for those readers who spot them without impeding the flow of those readers who don’t.

While this book is fundamentally humorous and takes as written that adults are obstacles to progress as often as protectors, the plot has depth and complexity that elevate it above fart gags and the unfairness of adults.

Kelly remains as sympathetic character. Her high-level of power is balanced by both a strong streak of obedience to rules and a strong awareness (for a nine-year-old) that the world is not always simple. This three-way division between what she is capable of, what is morally right, and how every child wants the world to be is especially poignant in her struggles with missing her parents while opposing their choice to be villains, and not being able to make her parents come home even if she can navigate the issues of being on opposite sides.

The supporting cast are similarly nuanced. Children are equally developed whether or not they have powers, ensuring that the focus remains on character rather than snazzy powers. Adults, while—appropriately for the viewpoint of a nine-year-old—often somewhat less detailed, possess a similar sense of being people before plot-advancers.

Overall, I enjoyed this book. I recommend it to readers seeking superhero action that is suitable for middle-graders but has enough depth for any audience.