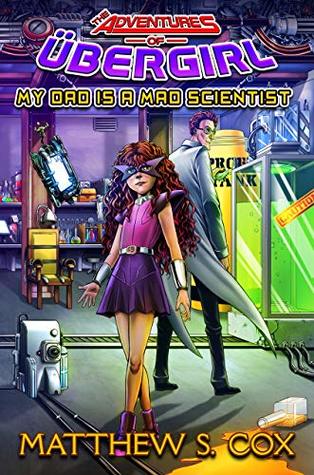 Cox demonstrates that accessible prose and cinematic action don’t have to come at the cost of emotional depth, creating superhero fiction that will appeal to readers of all ages and power levels.

Life is hard if you’re a nine-year-old who loves maths, especially if you’re smart enough to skip a grade. Kelly Donovan’s parents tell her to ignore the bullies and she does try, but a tiny part of her daydreams about what she’d do to them if she had abilities from a comic book. A dream that becomes a possibility when a mysterious crystal crashes to Earth, granting her—and a minority of other people—superpowers. A crystal that might have turned her father into a super villain.

As with Cox’s Widowswood series, this novel portrays the issues of being a pre-teen in a style that will be accessible to middle graders without seeming simplistic to more advanced readers. While Kelly’s superpowers amplify both the situations she faces and her possible responses, at its core this is a story about the same balance between doing what society says is right, doing what feels right, and doing what feels satisfying that everyone faces until their life experience and emotional maturity catch up with their desire for fairness.

Unlike Widowswood, this leans heavily on the over-the-top nature of the superhero genre: physics is routinely ignored unless it adds character (for example, superflight suddenly breaking windows); fights are cataclysmic but result in no real injuries (for example, a character might be smashed into a building hard enough to destroy the wall, but only be knocked unconscious until authorities arrive then wake with no after-effects); plots are extravagant in their complexity (for example, mind controlling entire cities).

Cox takes full advantage of the absurdity in the genre to weave humour throughout, This includes the classic thinly veiled alternatives of real world products that often appear in comics. However, his humour is self-aware rather than merely zany: he extracts equal humour from characters realising giant death machines and other staples of the genre don’t make sense, either in themselves or as solutions to problems.

While the novel is packed with the fast-paced action, crazy costumes, and exuberance of superhero comics, lacking only Kerblowie! and Zaapp! to be a morning serial, it also has a solid core of emotional complexity. Kelly faces very real questions of when might is right, when one should obey authority, and when one shouldn’t intervene; questions that are complicated by her age.

As with Cox’s other non-adult novels, both the serious and the humorous are presented in accessible prose, free of profanity or other mature topics, but with increasingly nuanced layers of implication: thus, one reader might enjoy seeing Kelly prove that children aren’t stupid, while a more mature reader might notice hints of how gender roles aren’t always true.

Kelly is a highly sympathetic protagonist, displaying competence and moral judgement without losing the simplicity of childhood. This mix of power with lack of experience is both an obstacle, leaving her afraid she might do something wrong or leaving her unsure what she should do, and an advantage, leaving her unaware of the risk of unintended consequences or freeing her from the limits of what is “known” to be possible. The slightly absurd situation of her father becoming a mad scientist lightens this struggle with morality without sacrificing depth.

The supporting cast are similarly nuanced, being both the clear tropes that are common to comics and middle-grade fiction, and individuals with complex motivations.

Overall, I enjoyed this novel immensely. I recommend it readers seeking superhero action that is suitable for younger readers without being shallow.