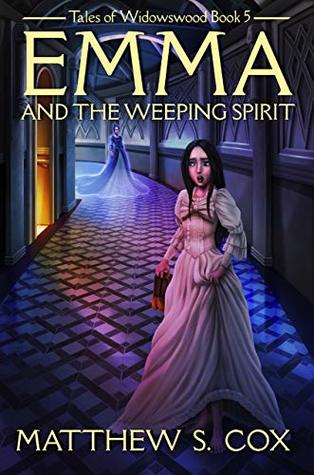 Cox reframes the classic haunted house trope for middle grade readers without sacrificing the complexities and uncertainties of spectral visitations.

This is the fifth book in Cox’s Tales of Widowswood series. Potential spoilers for previous volumes lurk past this point.

When a harpy attack drives ten-year-old Emma deep into unknown forest, her experiences help her stay calm—until the path out leads her through a graveyard haunted by ghosts and skeletons. Arising from nightmares the next morning, she hopes the terror is over; then her father reveals his sister has invited them all to her wedding, his rich sister from the big city family that her father left behind. Emma has found a way to deal with the worst Widowswood can throw at her, but how will she survive a place where she is considered a ill-educated rural and, worse of all, has to wear shoes?

As with the previous books in the series, Cox’s language is suitable for children, both in terms of accessibility and cleanness. However, again as with previous books, he does not allow this to make the plot any less complex or filled with emotion.

While this novel avoids actual horror, Cox does take account of both Emma’s increased age and her experiences since the first book; thus, the intimation of mortality or lasting injury is slightly closer to the surface and the sense of threat less swift to dissipate quickly.

This maturation is also reflected in the societies presented: although the point-of-view remains that of a child, the creepy loner and other adult stereotypes that fill young children’s perceptions have been replaced with more-nuanced adults with complex motivations and moralities.

These threads of greater threat and less clear answers are further enhanced by Emma’s separation from her natural environment: both in the sense of not having experience of the wealthy and urban, and lacking the immediate access to her druidry that she has throughout a village next to a wood.

Emma herself remains a well-crafted protagonist. Her perceptions and approach are childlike without being childish, and her reaction to both real threat and different social structures is a plausible mix of fear and innocent certainty that ensures she is neither unchallenged nor passive.

The supporting cast are each similarly well-balanced, with adults displaying a realistic spread of perspectives on the place of children, Emma in particular, and when a child’s concerns might be real. Cox weaves further depth by giving even Emma’s parents, who have the greatest reason to both protect and believe her, motivations that conflict with simply taking her side.

Overall, I enjoyed this book. I recommend it to readers seeking fantasy that is suitable for younger readers without lacking depth.