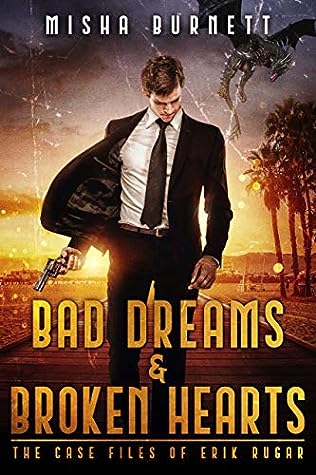 Burnett fuses the possibility of weird fiction with the solidity of crime noir to create a collection that is both a gritty detective story and a baroque urban fantasy.

Dracoheim is a human city, but abuts the Realms of Nightmare. Ancient treaties and modern laws define the appropriate uses of magic, mysticism, and migration. Mostly it works; however, when it doesn’t someone has to investigate the incomprehensible; someone like Erik Rugar, agent for the Lord Mayor’s Committee for Public Safety. This book collects seven cases of the weird but not wonderful.

Unlike many urban fantasy books dealing with magical policing, Burnett’s protagonist is not a magic user or a metaphysical James Bond laden with arcane gizmos. Instead, he is a slightly crumpled and stained cop with a badge and a gun, relying on grit and smarts. This ‘ordinary working stiff’ trope gives each story a deep sense of both crime noir and reality.

However, Burnett does not skimp on the fantastical; rather he uses this foundation of the extremely recognisable to support the doubly weird: Dracoheim is a city of hospices that legally drain the dying of their humours and craftsmen who reweave reality, ruled by bureaucracy but also by a dragon.

While the grind of police investigation and the strangeness of a city that trades with spirits might sound a harsh contrast, the mysterious artefacts, physics-defying metaphysics, and secret magical cabals echo the McGuffins, soft power, and organised criminals that the hardest of boiled detectives faced in classic noir; thus, the narrative resonates with common human experience without forgoing the fantastical. This is a world where the mean streets might actively seek to harm you, but you kick them in the teeth and get on with it.

In addition, where the presence of magic and other realms does add possibilities beyond the mundane, they are deeply integrated into the society rather than added to a pseudo-modern-Western-world. Therefore, although the commission of a crime or solution to a disaster might be both weird and unexpected, it firmly fits the in-world “technology” and human nature.

This use of different yet consistent appears in the subtle as well as the major: for example, Burnett has replaced high-end casinos with tabletop wargaming clubs but retained wrestling as a sport, painting an image of a world where some drives have expressed with superficial differences but humanity is fundamentally shaped by the same calls to deviousness and brutality.

Rugar is a well-crafted protagonist. He believes in the necessity of law but is not addicted to the form of it, making him—if not an entirely virtuous or pleasant character—a sympathetic one. In addition to the challenge of fighting the reality warping with only cunning and determination, the part of him that is drawn to help people is also the part of him that leaves him open to (sometimes literally) getting suckerpunched.

Burnett’s supporting cast are equally ‘people who are in a magical world’ rather than magical people, each a plausible vision of how individual circumstance can shape character as much as weird traits. This is especially highlighted in the final story which questions what makes a person a person anyway.

Overall, I enjoyed this book immensely. I recommend it to readers seeking gritty urban fantasy or speculative detective fiction.

I purchased this book for full price and was not asked to review it. However, the author did name a minor character after me when I responded to his social media post asking whether any of his fans wanted to be mentioned. As that character’s morals are somewhat less pleasant than my own, it could be argued that the influence—if any—was negative 😉

One thought on “Bad Dreams and Broken Hearts: The Case Files of Erik Rugar by Misha Burnett”