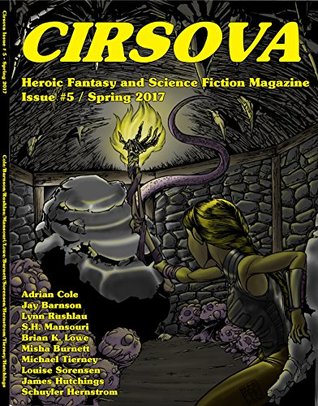 Alexander gathers a series of tales that suggest what might happen if people of violence and cunning rather than book-learning faced Lovecraftian threats.

This edition contains eight short stories, one novelette, and one poem, The majority of the prose works are set in the Eldritch Earth, an alternate prehistoric era that blends classic swords-and-sorcery with dinosaurs and Lovecraftian weirdness.

While each of those authors who have used the Eldritch Earth setting have placed their own slant on it, there are commonalities that are likely to divide reader opinion of the topic as a whole. Alexander describes the setting as a mix of Lovecraft and Edgar Rice Burroughs; and it is certainly both more weird than either Tarzan or Mars and more muscular than classic Mythos. However, the result is not an even division between the two points: the protagonists are thieves, warriors, and priests, each persons of action rather than Lovecraft’s academics, creating a contrast with his tales; but classic pulp in the vein of Conan already includes the trope of magic that is foul and illogical, weakening the impact of cosmicism. Thus, although the stories are likely to provide pleasingly fresh stories of people facing adversity and accepting their agency for fans of pulp action, those fans of Lovecraft who consider the insignificance of humans as the core trait of his work might disagree with Alexander’s claim that the stories are a change from authors sticking some mythos trappings on and calling it Lovecraftian.

Overall, I enjoyed this edition of the magazine immensely. I recommend it to readers seeking less cerebral Lovecraftian plot arcs or rollicking fantasy stories.