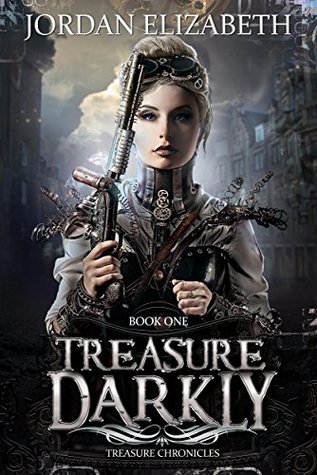 Elizabeth blends cowboy action with a touch of steampunk technology and magic to create a tale that might appeal to both fantasy and western fans.

Clark grew up in the brothel where his mother works, sneaking the occasional valuable from her clients’ clothes while they’re distracted. However, when the flask of absinthe he steals from a general’s pocket turns out to be part of a secret military experiment to raise the dead, he is forced to flee. Rather than spend a life on the run, he seeks out the father he has never met, the head of the powerful Treasure family. His father and step-mother welcome him with open arms, but not all his new family are prepared to treat an ill-educated miner as an equal. Helping defend the family from the neighbouring Horan clan seems like a chance to earn his place, but also threatens to expose his secret.

Set mostly in an analogue of the American Old West with electric motorcycles and necromancy, this book is at the fantasy end of steampunk. However, Elizabeth keeps the focus on personality and other things common to all worlds rather than bedecking the narrative with mechanical and mystical fripperies. Thus, the plot and world feel plausible—albeit clearly fantasy—rather than diffuse or overloaded.

Speculative elements aside, the opening sections of the novel follow the classic Western arc of a drifter with a secret facing off against a family of rapacious ranchers with ties to crooked politicians. However, the addition of subtle magics and unusual technologies allows the plot to range beyond the purely mundane challenges of gunfighters, blackmail, and unfair laws.

Unfortunately, although the overall concepts of magic and steampunk technology have shaped the world, not all of the specific instances drive the action. Thus, while this book is the first in the series so some things might return in a later volume, some readers might feel disappointed or disbelieving that characters don’t use advantages that they have. This is especially true of the necromancy, which gives Clark the power to kill someone magically for a brief while after bringing someone back, but is neither used as a tool nor as something for him to wrestle with the ethics of using.

This issue of Clark not taking advantage of one power aside, the necromancy is an engaging aspect of the story, in terms of both description and impact. The presence of a short time limit after death to act allows especially for it to effect major change without becoming a tension-removing advantage.

In parallel with the cowboy adventure, Elizabeth weaves a tale of social conflict: while Clark is told he is welcome, that doesn’t magically give him an understanding of how the rich and civilised live or make his siblings see him as more than a uncultured fool. This struggle to become a “proper” Treasure is paralleled by both his sister Amethyst’s dislike of even the amount of frontier life the family indulge in and by the background drive to “civilise” the natives.

Clark is a sympathetic protagonist. While he does start the book a petty criminal, so cannot be classed a pure hero, the thefts are motivated by survival and he is otherwise a decent person; thus his ability to fit into the Treasures is hampered as much by his desire to not take advantage of the situation as it is by the lack of a polite background.

The other cast are equally flawed yet accessible: characters raised in status or luxury are driven by a desire to maintain it, but not at the cost of other values; people respond with less than their best selves if mislead or mistreated.

Overall, I enjoyed this novel. I recommend it to readers seeking a classic tale of a decent outlaw facing dishonest men set in a slightly magical world.