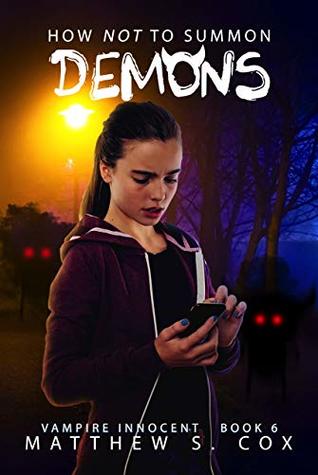 Relying on strong characterisation rather than flashy effects, Cox skilfully extends his exploration of neophyte vampirism beyond the immediate challenges of metaphysical limitations while retaining the immediately accessible echoes of becoming an adult.

This novel is the sixth in the Vampire Innocent series. Possible spoilers ahead.

While being a vampire makes going to college a little harder and gets in the way of seeing her friends, after five months of practice, Sarah has found workarounds for the worst of it; and wouldn’t trade the opportunity to still see her family and friends for anything. So, she leaps at the opportunity to take her younger siblings trick-or-treating. Unfortunately, the gentle frisson of Halloween is spoiled by a series of accidents and occurrences that almost scream supernatural events. This time Sarah is sure she isn’t part of the cause, but that just makes it harder to know where to start.

Unlike previous volumes, the plot isn’t incited by Sarah doing a favour for someone that turns out to have unforeseen consequences. However, it does continue the familiar—and by this point in the series, reader-approved—pattern of Sarah trying to overcome the challenges of another part of the magical world before things fall apart, while attempting to overcome more challenges of adulthood before things fall apart.

As with The Last Family Road Trip Cox’s excursion into new metaphysical ground leans more on the fantasy side than the urban. However, events retain a sense of an underlying coherent—albeit decidedly not mundane or humanly rational—set of rules, and the more hypnogogic aspects feel entirely fitting for the symbolic festival of Halloween.

Unlike previous books, Sarah’s non-mystical interactions are almost entirely free of drama: her family have settled into a routine that accommodates her vampirism; she finds some time to be with her friends; and her relationship with Hunter is solid. Unfortunately (for her, not the reader), the inexplicable supernatural events are no respecters of metaphysical boundaries, so her struggle to protect her relationship with friends and family from the impacts of vampirism is replaced with a struggle to protect her friends and family from both directly mystical threats and mundane, but equally damaging, crises they might create.

As with all of Cox’s books, there is a thread of apposite humour that both casts the seriousness of the challenges in a stronger light and entertains for itself.

Sarah remains a highly sympathetic protagonist. Her lack of experience of the occult world continue to make her a suitable viewpoint for readers, while her determination to solve challenges without compromising her principles rather than sit back or rely on might making right expand her appeal well beyond readers facing the arduous inequities of childhood’s end. In fact, her desire to not only not use her powers to impose justice but to not even risk others choosing to do it where she hasn’t is likely to hit home with even the most experienced of moral thinkers.

The returning cast have evolved along with Sarah, maintaining consistency with previous books while gaining nuances of personality appropriate to the unnatural achievement of integrating a vampire into their lives.

I enjoyed this novel greatly. I recommend it to readers seeking urban fantasy that is driven by character.