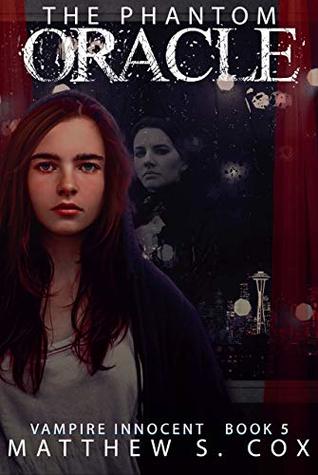 Cox displays the issues of starting college through the dark lens of vampirism, creating a teenage vampire tale that has much to interest both horror readers of all ages and members of non-existent Hermetic orders.

This novel is the fifth in the Vampire Innocent series. So, there are probably spoilers ahead.

With vampirism having ruined her summer plans, Sarah is determined not to let it spoil the next stage of a normal life: college. Unfortunately, while her local college offers night classes, the evenings are still light, making her burning desire to get there literal as well as figurative. More unfortunately, Sarah’s ability to see ghosts leads her to a secret magical order who object to her interference and would pay no heed to the decree protecting Sarah’s family were they even aware of it.

As with the previous volumes, the plot of this novel shifts between the mystical and mundane issues of being a vampiric teenager (and indeed a young vampire).

After his brief excursion into the woods and fae magics of the previous book, Cox returns to the decidedly urban fantasy of modern vampire tales. Building on the hints of ghosts bound to objects in early books, he delves into the darker side of necromancy: binding spirits against their will.

While this magical order does display many of the standard tropes of academic sorcery—readers are most unlikely to be surprised where their sanctum is hidden or their archaic dress style—Cox’s use of nuance and humour make this comforting accessibility rather than distancing stereotype. In a manner very familiar to fans of White Wolf roleplaying games, their obvious power is limited by an almost complete lack of knowledge about anything mystical beyond their own branch; this both allows them to be a real yet not unbeatable threat and creates opportunities of comical misunderstandings that leaven the horror.

The vampire community have the same lack of knowledge of magicians: even those who have some knowledge of magic are unaware of or disregard the truth about ritual sorcery. Again this both adds complexity to the plot and provides opportunities, and creates its a second set of darkly humorous incidents.

Sarah’s mundane life has a similar—if less pretension and mysticism filled—level of complexity: while the new term marks the end of summer, it doesn’t mark the end of light and warm evenings, placing the eight o’clock start time of night school in the zone where it’s often still too bright for even Sarah’s tolerance for sunlight but too pleasant for bundling up in enough layers to hide the entire body.

Although the end of night school is fully dark, it is also late enough that Sarah’s friends are close to sleep and her boyfriend is desperately cramming in study between getting back from work and crashing out before an early start.

And, athwart the two areas of her life, her home life refuses to settle into a comfortable pattern: since the road trip, her parents and siblings have finally achieved an emotional acceptance of her new state; however, the supernatural won’t leave them alone. Sorcerers and ghosts aside, the amiable interest of an elder vampire is still disturbing.

Sarah remains a sympathetic protagonist: she has a greater understanding of vampirism and a deeper acceptance that she is a vampire, but still feels the burden of isolation that not being human brings; skillfully balancing plausible emotion with engaging story, Cox provides enough moments of challenge and doubt that readers feel her sense of loss while maintaining an overall sense of progression that shows Sarah as an active participant in her life. This dichotomy is especially visible in her reaction to college: as a vampire she doesn’t need—perhaps can’t even have—a regular job, so why should she put herself through the difficulties of getting a degree; but if she doesn’t then what could she do instead, and what might abandoning such a strong symbol of normality cost her.

The supporting cast have the same mix of accessibility and nuance as Cox’s other works, providing the reader with a deeper understanding and varied perspective on both the world and Sarah’s issues.

Overall, I greatly enjoyed this novel. I recommend it to readers seeking vampire fiction that has all the humanity of paranormal teenage drama without any mawkishness.