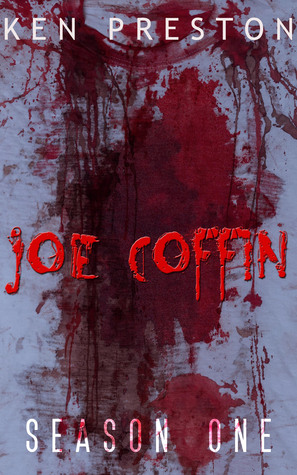 Preston combines the unpolished horror of Eastern European legends with the brutality of gangland culture to create a tale that provides the purity of classic vampire stories without the simplistic moral binary.

Joe Coffin’s second wife and young son were brutally murdered while he was in prison. So, when the fellow member of the Slaughterhouse gang who picks him up on the day of his release says he’s found the men who did it, Coffin doesn’t hesitate. However, after his wrath has faded, the story starts to feel a little implausible. Meanwhile, the son of his first wife is missing, trapped in a cellar and bled daily by mysterious captors. A gangster to the core, Coffin doesn’t trust the police to deal with either situation, but—as the issues surrounding each of his former wives start to overlap—he begins to wonder if he can trust anything (or anyone) other than his fists.

At it’s most basic, this is a tale of a criminal and thug discovering the existence of vampires, inviting comparison with From Dusk Till Dawn. However, while a nightclub is a significant venue, Preston sets the action in the gang-owned streets of Birmingham, creating a much more visceral experience than Tarantino’s glamorous violence.

The evocation of Birmingham’s criminal underworld is bleak. Preston neither conceals nor excuses that these are wife-beaters and murderers, led by a man who expects wives to stay with their abusers for the image of the gang. This is a world where the closest to virtue anyone gets is redistributing protection payments so businesses run by petty criminals seem to have underpaid rather than businesses run by decent people.

Preston’s vampires fit the world of real gangster culture perfectly. These are brutal creatures, devoid of nobility or honour. While sexual, it is a tawdry display of self-gratification, stripped of the smouldering passions that often gild vampiric sex.

And Preston’s language and descriptions fit this: torn flesh is displayed in full rather than hinted at through character’s reactions; characters swear crudely and often. This is not a book for readers who want their rogues charming or their vampires romantic.

The one thing that might interfere with immersion into this gritty world of thugs and predators is Coffin’s name. Although Coffin is an actual British surname, readers unfamiliar with that might find it unconsciously echoes the names of more stylised Gothic tales. Conversely, those readers very familiar with British names might wonder at how a gang enforcer in Birmingham ended up with the surname of Devonshire nobility. This is a minor distraction though, that—if suffered at all—is likely to pass after a few chapters.

While Coffin is the centre of the story, Preston also uses other viewpoint characters: this access to other sources of information both provides the reader with evidence Coffin’s strategy is based on imperfect knowledge, heightening the tension, and allows for the introduction of visceral vampire action earlier in the book, removing any frustration the reader might feel at a vampire tale that doesn’t feature vampires without requiring Coffin to be almost wilfully obtuse in his refusal to work out what is going on.

This book contains the first four sections of an ongoing serialised narrative. However, this might not be obvious to most readers had Preston not highlighted it in advance. The transitions between the parts are smooth, noticeable only as more than a chapter break by the presence of a page marking the change. Whereas, the last pages of part four close off the arc of Coffin’s investigations into his wives’ problems, creating the same sense of closure as the ending of a normal novel.

Coffin is a sympathetic protagonist. While he is a committed criminal who embraces violence as both a career and a knee-jerk reaction, the glimpses of his past explain—without either justifying or glamourising—his choice to become chief legbreaker for a gang lord. Additionally, in a world where all the characters hurt each other emotionally, his weakness is pretty faces, avoiding the stereotype of thug-with-a-heart-of-gold while retaining the “virtue” of genuinely caring about his family, current and former. Coffin is also—although casually violent—not stupid or monomaniacal: he thinks about his actions and uses cunning or discussion if they seem a more profitable option.

The supporting cast are similarly multi-dimensional: reporters are united by nosiness but have distinct goals; gangsters disdain the law but each do so out of a different combination of group loyalties and moral priorities; and vampires approach the issue of ravaging humans with all the personal variety that individual humans display in pursuit of the same goal.

Overall, I enjoyed this book immensely. I recommend it to readers seeking horror where the vampires are monsters not misunderstood creatures.