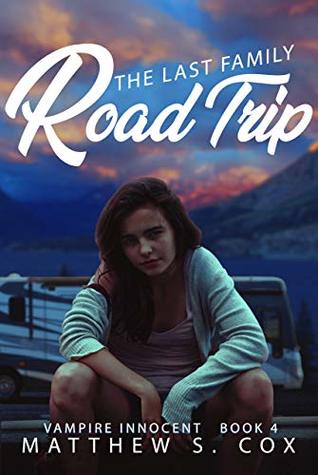 Cox blends coming-of-age tropes with the unique challenges of ethical vampirism to create a fresh and engaging tale that also evokes the joy of classic 80’s horror.

This novel is like totally the fourth in Cox’s Vampire Innocent series. Hashtag Spoilers.

The constraints of life as a vampire—even one who can tolerate some exposure to weak sunlight—make sightseeing with family next to impossible. However, after months as a vampire, Sarah is even more determined not to waste what time she has left with her family. So, when her dad says he has a plan for the annual family road trip that will work around her new condition, she agrees to go. After all, anyone who wants to harm her or her family will be left behind and there’s no reason anyone will even notice she’s a vampire while she’s there.

From the moment Sarah’s dad announces his plan to make this year’s holiday a camping trip to some famous caves so Sarah can join in without having to worry about the sun, the plot unfolds with a grim sense of inevitability.

However, this looming dread is leavened with Cox’s usual humour: from the RV converted into a mobile haven to the two teenage vampire-hunting brothers, this novel is salted with homages to classic vampire films; an echoing that is converted from just pleasing Easter eggs or counterbalancing moments of lightness into another layer of plot by Sarah’s own awareness of at least some of these films.

Cox weaves a thread of character-based struggle through the recognisable imagery, providing more horror and comedy that both enhances and subverts the reader’s expectations.

As with the previous volumes, this book brings a new form of vampire to the fore: however, unlike previously, the description of the type comes almost solely from Sarah’s memories of what another vampire mentioned in passing, a few brief conversations, and Sarah’s commentary that they aren’t what she expected. As such, while readers are likely to accept the vampire is a threat, they might not truly feel it or understand the extent of the type’s powers or weaknesses in the way that was clear for those encountered in earlier books.

Cox also reveals more of the non-vampire metaphysics of his universe. Although the existence of other supernatural beings and mystical powers fits with—or is even made almost a requirement by—the ghosts in The Artist of Ruin, it does dilute the binary between vampire and human, weakening the sense that Sarah is intrinsically rather than merely functionally separated from her family and friends.

Sarah remains a sympathetic protagonist, displaying the constant mix of fear and self-focus that characterises someone on the cusp of adulthood without indulging in the vacillation and angst that some teenage protagonists do. This sense of genuine emotional struggle rather than stereotypical overreacting is enhanced by the nature of some of her doubts: people have previously threatened her family, so choosing to go into strange territory is a balancing act between losing access to her vampire allies and not being in the same place as her enemies. Her struggle between vampire, sibling, teenage child and almost adult is also plausible and engaging, advanced from previous volumes but retaining the fundamental tension between abandoning one’s family and being stifled by a role that no longer fits.

With the plot centring around a road trip, Sarah’s family have a greater page time, revealing nuances and subtle contradictions of personality that give them an even stronger sense of being the protagonists in their own narratives, thus making Sarah’s struggle to be herself without sacrificing her ties to her family even more emotive.

Although Cox’s supporting cast will be recognisable to readers familiar with the Lost Boys and similar films, the images are mixed with fresh nuances, making them a comforting echo rather than a caricature.

Overall, I enjoyed this novel greatly. I recommend it to readers seeking vampire fiction that neither casts the vampire as a monster nor a charismatic millionaire looking for their eternal bride.

I obtained a free copy of this book from the author by using meaningful stares and stylised lighting, scored with saxophone-driven rock.