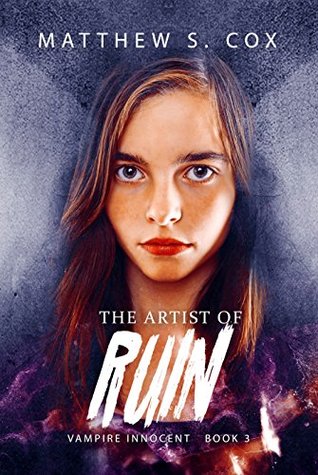 Cox continues to blend classic horror tropes, the issues common to teenagers, and unique perspectives, creating another young-adult vampire tale that will appeal to readers of all ages and on many levels.

This novel is the third in Cox’s Vampire Innocent series. Spoilers might lurk ahead.

With the mood swings her transformation brought fading, her parents agreeing a summer job isn’t sensible, and a boyfriend who isn’t freaked out by her new state, Sarah is enjoying being a vampire. However, the interference of not one but two ghosts throws her lazy life back into chaos; her co-best-friend Ashley choice of new boyfriend hurls her into memories of the past; and a good deed accidentally irks a vampire who is vengeance personified.

Where the previous volume left Sarah struggling with the potentially lethal political machinations of vampires, this one exposes how a vampire’s magical powers and need for stimulus can cause the smallest of things to turn into an obsessively byzantine feud.

In parallel with this new thread of vampire society, Cox provides details of a vampire type previously only mentioned in passing and reveals a little about how ghosts function, both deepening and expanding his world further.

However—while readers familiar with White Wolf’s World of Darkness are likely to feel a resonance with Cox’s vampire mythos—this is very much not a clan book or other gaming supplement: the world-building is entirely subsidiary to Sarah’s personal experience of teenage life as a vampire.

Indeed, fulfilling some arcane geas imposed on all YA authors in the mists of time, perhaps half the book is focused on romance. Sarah is revelling in new love but challenged by questions of how (or even if) conflicting schedules could work in the long run. One of her friends is interested in a coworker, but unsure if they are as wholesome as they seem. And Ashley is determinedly in a relationship with someone who doesn’t get on with any of her friends. However, Cox applies the same compassion for character that he displays in other areas, capturing the emotion without drowning the reader in angst as some YA novels do.

Of course, telepathy, compulsion, and memory editing (the simplest of vampire powers) are ideal tools to resolve the doubts and misunderstandings that plague teen romance—if one can resolve the ethical and emotional questions of violating people’s privacy and autonomy. And, to make matters more complex, Ashley’s behaviour might be a reaction to her previous sexual encounter with Sarah’s mentor, raising the spectre that even if a vampire is extremely careful with their powers, merely being around humans might cause psychological issues.

As previously, Sarah is a sympathetic character, neither tumbling into inhuman selfishness nor maintaining a priggish refusal to use her new abilities. While her attempts to resolve issues retain the naivety and compassion of a decent teenager, her time as a vampire has—very plausibly—added a greater comfort with both violence and action in general.

The supporting cast are similarly nuanced, shaped by a mix of personal quirks and situational forces. While this makes all of the characters more plausible and engaging, it is especially powerful in the vampires, both offering the hope that Sarah can avoid losing herself to her vampire nature and casting the monomaniacal obsession of her nemesis in starker contrast

Overall, I throughly enjoyed this novel. I recommend it to readers seeking a character-driven perspective on fledgling vampirehood.