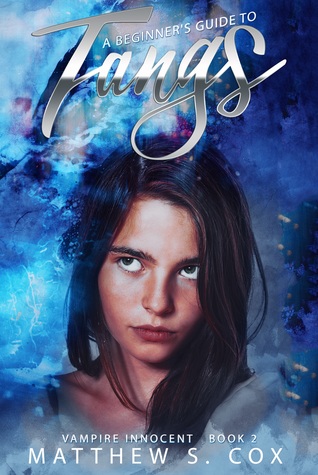 Cox skilfully balances the extremism inherent in both vampires and teenagers with the unique complexity of every person, creating young adult urban fantasy with both passion and depth.

This novel is the second in Cox’s Vampire Innocent series. Spoilers might lurk ahead.

With a whole fortnight of being a vampire under her belt, Sarah Wright is starting to feel settled in her new unlife—apart from the random surges of negative emotions. Her family have adjusted well—although her mother’s refusal to see the difference between being able to go out in daylight and it being sensible is (literally) exhausting. Her best friends haven’t run in fear—but one of them has been acting oddly. And she has a new non-psycho boyfriend—and all the guilt of not telling him what she is. But, apart from that, everything’s fine—except for the mysterious figure stalking her and the war between ancient vampires that her sire places her in the middle of.

Where the previous volume dealt with the major issues of Sarah fitting back into her old life after death (both literal and bureaucratic), this one shifts to the less vital—yet conversely perhaps more irritating—everyday issues of not being the eighteen-year-old human she was: such as balancing her duty to help her parents by taking her little sister to dance practice in the afternoon with the expenditure of blood and increased risk going out in daylight poses. While the specific issues are created by vampirism, Cox presents them as moral and emotional struggles rather than conflicts of extreme biology; as such, they will resonate with readers who have experienced the more mundane balancing act that comes from having adult concerns of one’s own but still living under one’s parents roof.

This book also delves deeper into ongoing vampire society, exposing Sarah to the strange blend of ancient drives and recognisably human politics that she will need to spend the rest of her existence easing through if she wants to survive. Ironically, due to her transformation having made her “cuter” (rather than more threatening or seductive) and to her vampiric sponsor liking flouncy fashions, the vampire elites display the same irritating habit of seeing her as a young girl rather than an adult that her parents still fall into; however, her actually newness to vampirism adds the difficulty of not being certain how to show them they are wrong.

As with the rest of the book, the romantic arc is nuanced and character-driven, rather than a string of Young Adult stereotypes. Sarah does worry about whether she is really attractive and how fast is too fast, but Cox does not fill paragraphs with agonies of angst-ridden vacillation. Also, many of the significant issues are vampiric, providing a fresh perspective on the ubiquitous challenge of a teen romance (or indeed any romance): the choice between hiding a major part of oneself and risking one’s paramour rejecting one.

Each of the threads of previous life, vampiric undeath, and new romance provides both a new series of complications to the others, increasing the challenge without requiring an implausible escalation, and creates a contrast to them, showing issues with a new perspective and freshening the palate for new drama.

Cox also skilfully bleeds parts of Sarah’s life into others, making her mortal life a hostage to the wishes of vampires and vice versa.

As with all of Cox’s books, there are plenty of moments of wry humour and cultural reference, in this case based around vampire films, teenage mores, and—lightly—the sexuality that pervades each.

Sarah remains a sympathetic protagonist. Rather than becoming self-centred in her struggle to understand her new condition, she turns outward, her realisation she is not what she seems becoming a lack of judgement for the apparent oddities of others. Her (slightly) greater understanding of her new condition grants her better access to her powers; however, that brings greater difficulties over knowing when to use them. And, as the only vampire she knows maintaining contact with her mortal life, there is no one she can turn to for helpful examples of where the line between wilfully ineffectual and privacy-violating bully lies.

The supporting cast are as nuanced as the plot, returning characters shaped by their intersection with vampirism (known or not) but not defined by it.

I loved this book and am strongly looking forward to reading the rest of the series. I recommend it to readers seeking an engaging vampire tale.