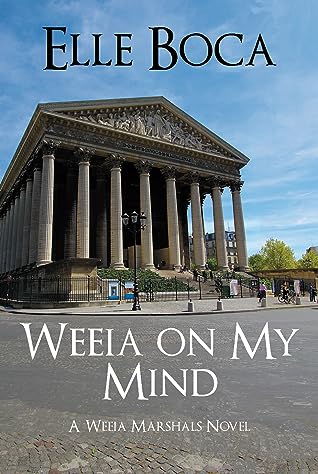 Boca weaves a fresh perspective on urban fantasy with the very real issues of both policing and covert operations to create a thriller driven more by ethics and character than flashy powers.

This book is the second in Boca’s Weeia Marshals series. There may be spoilers ahead.

When one of the Weeia merchants is threatened by the expansion of a human gang, Marshal Danni Metreaux must find a way to protect him without drawing attention to her people. Already struggling to succeed despite her boss’ refusal to support her, she finds herself unexpectedly burdened with a self-assured trainee; a trainee from the rich and powerful Parisian Weeia society that she is constantly judged for not being a part of. And, to top it off, her new love interest seems to suddenly be avoiding her.

Boca continues her blend of police thriller and urban fantasy, shifting perspective from how to deal with the revelation that Weeia exist to how to protect the Weeia without risking revealing them. This change from silencing those who already know to keeping it a secret creates a new series of ethical and practical problems: is killing a human to avoid financial loss to a Weeia acceptable? Is avoiding risk of exposure always more important than stopping a criminal?

Danni’s possible relationship with Iaen adds a second thread of ethical tension: if she accepts his help, is she obliged to use her position for him if he asks? should an officer of the law date a criminal? And is petty crime for personal gain morally worse than a Marshal killing humans to keep a secret?

Boca infuses explanations and reminders of her world and past events through the story using a combination of conversations and plausible triggers for memories. As such, while those readers with a firm recall of the previous volume and her parallel Weeia series might find themselves told things they know, they are unlikely to feel lectured at or distracted from the action. Although, this infusion doesn’t provide background on all the relevant events, it is also detailed enough that readers unfamiliar with Boca’s other work will not be lost.

Danni continues to be a sympathetic protagonist, struggling to do the right thing with the resources available. While her negative reaction to a new, privileged, trainee is not commendable, it is entirely plausible. Where some readers might find her less realistic (or less sympathetic) is in her occasional lack of emotional response to harming humans: despite not technically being human, her general compassion for humans makes her utter lack of self-doubt over the death of some humans seem odd.

Sebastien, the trainee Marshal, is well-crafted. Boca skillfully avoids the extremes of embodying and rejecting privilege, creating a character who is clearly shaped, but not defined, by his upbringing. This casual access to upper-class Weeia society (and Parisian society as a whole) provides both an additional tool for investigation and a source of tension between the Marshals as he is embraced where she is disdained.

Francois, the senior Parisian Marshal and Danni’s boss, continues to be mostly present in the form of a looming absence. While this does keep the focus firmly on Danni, he might also feel somewhat two-dimensional to readers who—after the events of the first book—expect to uncover more about how and why he seems to ignore his responsibilities yet not be replaced.

The remaining supporting cast, returning and new, display a nuance appropriate to their involvement in the plot, maintaining a balance between seeming stereotypical and being a distraction.

Overall, I enjoyed this novel. I recommend it to readers seeking an urban fantasy thriller where the supernatural isn’t a poorly concealed secret.