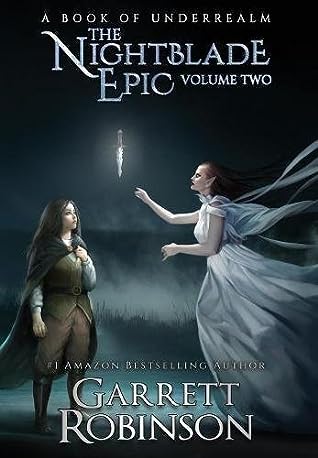 Robinson continues to blend fast-paced low fantasy with a mature perspective on what becoming a hero actually entails in the long term.

This book contains Shadeborn, Weremage, and Yerrin (the fourth, fifth, and sixth books in Robinson’s Nightblade series), along with a series of essays on the world.

The news that Loren’s father died of the injuries she inflicted escaping him has torn away the prop of never killing around which she built her self-esteem, casting her into melancholy and stalling the quest. Her companions tolerate her inaction for the moment, but with the Shades continuing their nefarious schemes and the battle against them the only thing keeping Xain from slipping back into magestone addiction, what might delay cost?

While Loren’s struggle to overcome her malaise is a well-written exploration of character that will grab readers who enjoy the series for her struggles, the entirely plausible withdrawal from action creates a situation without any immediate sense of consequence. As such, the opening section of Shadeborn is uncharacteristically slow. However, the action does pick up again soon after, making it well worth the effort for readers who are more interested in Robinson’s epic plots than angst to read on.

Where the events of the first three volumes—or at least their overt appearances—were mostly at a personal level, these novels follow Lauren’s actions on a national level, exploring not just the wider conspiracies but what it means to have become a hero. Clearly respect grants influence, but does it (and should it) grant authority? Sacrifices seem reasonable when one is on a quest, but what is reasonable and proper for everyday life? And is legendary figure a real job?

In addition to the plot and character aspects of this expansion, Robinson makes full use of the issues of soft vs. hard power to show the reader more of the political and cultural nuances of his world.

Having realised life is not as tidy as the tales of heroes suggest in the previous volume, Lauren now faces the realisations that her failures can have dire consequences and that being in charge doesn’t make you good at being in charge. While her overall success in coping might seem high to some readers, she does not display the casual exceptionalism of the farm-boy-turned-saviour trope; as such, readers are likely to sympathise with her struggle rather than want to slap her.

The supporting cast, particularly those returning from previous books, display the same tension between heroism and reality, pulled between the obvious rightness of the overall goal, the dishonour of pragmatic solutions, the human cost of ignoring pragmatic solutions, and the lack of firm foundation that can come from having no personal life.

Robinson’s addenda provide greater detail on the founding of several of the current kingdoms, a detailed calendar of when the events in the books happen, and a number of interactions between characters that do not appear in the novels. While these are not necessary to enjoy or understand the arc of the series, they do provide more depth and varied perspectives on both the world and certain events. As such, readers who love Robinson’s world-building are likely to find them strongly engaging.

Overall, I enjoyed this collection. I recommend it to readers seeking low fantasy that focuses on what happens after one becomes the hero of the hour.