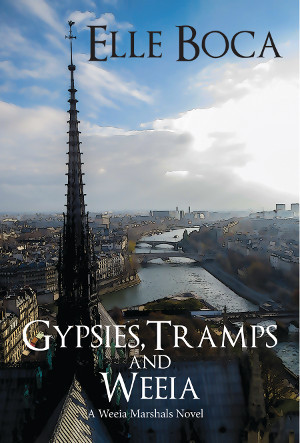 Boca mixes the shock of moving to a new culture, the frustration of being a cop with a boss who won’t support them, and an urban fantasy world that isn’t filled with the usual creatures to create a tale of magical investigation that is driven by character rather than special effects.

Near identical but gifted with magical abilities, Weeia have always lived among humans in secret. The Marshals exist both to capture criminals and ensure the secret remains. When Danni is offered a placement in Paris straight out of training, she can’t believe her luck. However, with her predecessors dead, the Marshals’ office near derelict, and her boss only interested in her not getting in the way of his life of decadence, she realises her posting might not be what it seemed.

This novel is set in the same world as Boca’s Unelmoija series. However, it neither relies upon nor reveals events in those novels. As such, it both is suitable as an introduction to the world, and can be read in parallel to the Unelmoija arc.

Unlike the focus on mystical heritage and secrets of Unelmoija series, this novel is akin to an urban fantasy detective or police procedural. While it has a large dose of the same unique metaphysics, a substantial part of the plot revolves around using—or subverting—procedures, analysing evidence, and investigating rather than wielding strange abilities and unravelling prophecies. By creating a police service that is similar to those of Western nations but different in a number of key ways, Boca skilfully balances the reader’s desire to solve along with the characters against the use of magic for investigation.

Boca weaves a detailed but not obsessively so thread of Parisian life through these mysteries, adding to the firm foundation created by mundane detection, creating a parallel series of challenges, and rounding out characters. While she admits to taking some liberties with reality, this Paris is likely to feel real to all but the most Parisian of readers.

Although there are—as might be expected of what was written as the first book in a series—some questions left unanswered, Boca resolves the majority of threads, providing Danni with victories that are not only satisfying but significant enough that the book could stand as a solo work.

Danni is a sympathetic protagonist. The daughter of Marshals who were disgraced by some unexplained event, she is torn between an unconscious desire to present herself as a good Weeia and many years of not letting bullies silence her; this opposition both drives and inhibits her efforts to undertake her posting efficiently despite the rest of the Marshals’ presence wanting her to stay quiet and leave thing alone.

The supporting cast are similarly shaped by internal contradictions, making them, Weeia and human alike, feel like real people living lives beyond the plot.

Overall, I enjoyed this book. I recommend it to readers seeking an urban fantasy thriller that relies on character and investigation more than magical abilities.

One thought on “Gypsies, Tramps and Weeia by Elle Boca”