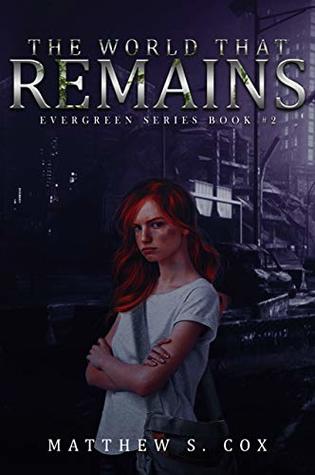 Cox fuses the scarcity of resources and breakdown of civility of post-apocalyptic narratives with the personal focus of young adult fiction to create a survival thriller driven by character not trappings.

This novel is the sequel to Evergreen. Danger of narrative contamination past this point.

After escaping the gang-ridden ruins of her home for Evergreen, Harper Cody thought she’d found a safe haven for her new family-by-choice. However, her decision to join the Militia in exchange for being allowed to keep her father’s shotgun puts her on the front line for any threats that do crop up. Half-convinced the Militia don’t take her seriously anyway, it would be easy to give up; but with rumours of a shadowy shape stalking children, that would mean leaving her sisters’ fates to others.

Perhaps the most obvious testament to this novel’s strength is that—despite Cox having never intended to write a series—one wouldn’t know the plot wasn’t designed to continue unless he’d mentioned it: while there are new characters and discoveries, the story is driven almost entirely by people acting consistently rather than existing for the plot.

Ironically, the weakest part might stem from Cox not simply relying on the strength of characters to immerse the reader in the ongoing story. While there is no explicit prologue, the opening scenes containing Harper walking her patrol route while pondering her situation at least skirt the line between plot and reprise. However—while this might feel dry or forced to some readers already familiar with Evergreen—it is a brief deviation from the otherwise immersive style well worth reading past, and does make the book even more suitable as an entry point to Cox’ work.

As with the previous volume, the plot is a balance of the mundane and extreme-yet-realistic challenges faced by people who have survived a widespread nuclear attack, mixed with plausible issues of being a teenager with a comfortable life thrust into survivalist adulthood. This use of events that might be seen in a report on a war zone or other area slightly worse than a modern Western democracy grants the threats a visceral truth rather than allowing tension to bleed away through any unconscious perception of them as just part of some baroque game or fantastical society.

This inescapable sense that the world in the book is ours but for the nuclear attack hits even harder on the moral challenges: if the trappings of society that supported decency, such as resources beyond mere survival, are gone, is it moral not to enforce order brutally.

Harper remains a sympathetic protagonist. No longer as fixated on her failure to kill her father’s attacker, but still instinctively horrified by the thought of killing someone, she displays realistic psychology while avoiding being irritatingly passive. Instead, she strive to be worthy of her gun and the Militia while not being certain she is good enough.

This uncertainty over her decision-making echoes through the possible romance sub-plot: however, unlike some young adult protagonists, Harper’s blundering around her feelings is built on a previous friendship having put people at risk and the ongoing doubt over her role in society as a whole; as such, more mature readers are unlikely to find her extended uncertainty irritating in the way some “obvious but to the characters” situations are.

The supporting cast, both recurrent and new, are similarly complex characters struggling with the shift from comfortable affluent society to survival among the ruins.

Overall, I enjoyed this novel greatly. I recommend it to readers seeking a post-apocalyptic tale that uses character rather than spectacle to excite interest.