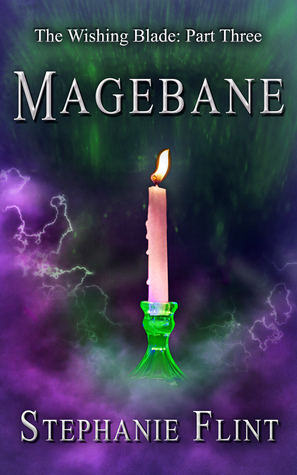 Flint provides an accessible perspective on the morals of magical compulsion while maintaining the fast-paced fantasy of previous volumes.

This novel is the third in The Wishing Blade series. Spoilers ahead.

Following their reunion with Daernan’s father, a champion of the gods, Daernan and Siklana continue their quest to rescue Toranih and defeat the shadow army. However, the gods and their servants make very different demands upon them: Daernan to wield a power he does not seek; and Siklana to ignore the only magic she might learn. Meanwhile, Toranih—bound by a promise to the shadow army’s general—strives to balance obedience to a teacher with moral action. And Shevanlagiy, one of the youths’ most persistent antagonists, discovers that a plan to build a safer world using magebane may instead destroy Daernan, the only version of her childhood friend not to die in childhood, and with him the world.

Each of the story lines open without a recap and in the middle of events; as such, the opening scenes might feel confusing or lacking in emotional connection to readers who have not started this book shortly after reading the previous volumes. While Flint quickly and smoothly integrates recaps and reminders into the narrative through plausible meetings and conversations, this novel relies heavily on continuing plot lines, making it unlikely to serve as a good entry point to the series.

This initial struggle to integrate back into the story is amplified by Flint’s choice of names: although baroque complexities that don’t fit English conventions are as plausible as any other name for certain beings, the need to unravel them rather than skim without noticing provides both a distraction from the work and a difficulty in anchoring. Fortunately, this mostly passes once the reader has picked up their place in the overarching narrative.

Any difficulty in settling in aside, the plots are engaging takes on the fantasy tropes of power vs. cost, gods vs. mortals, and destiny vs. freedom, combined with the universal questions of whether one can sacrifice some for a greater good. These struggles between means and ends are perhaps best exemplified in the appearance of the god of alcohol to assist Daernan in protecting the world: while his ability to control others is used to make them do things they enjoy rather than to turn them into mindless soldiers as the shadows do, it is still taking away people’s free will.

The recurring protagonists continue to develop realistically from the previous volume, each still struggling with finding a balance between youthful absolutism and adult expedience and each suffering for their choices of where to draw the line.

Shevanlagiy provides an interesting perspective into the “evil” side of the war, showing it often to be no more self-interested than the “good”. However it also opens up what might be the most divisive thread of the book: while Flint provides a possible explanation, some readers might find it odd that Shevanlagiy—Daeran’s friend in another reality now using a different name—doesn’t know more about her youthful self in this world.

Overall, I enjoyed this novel. I recommend it to readers who enjoyed the previous volumes.