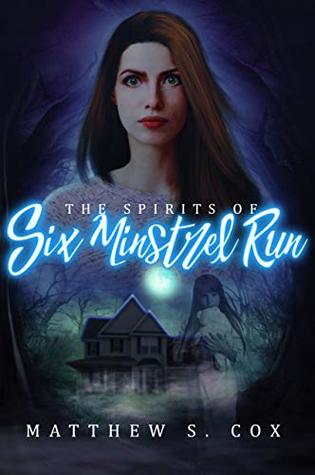 Blending a nuanced portrayal of the paranormal with the mundane subtleties of marriage and small-town life, Cox creates a supernatural thriller that draws it’s horror as much from the plausible reactions of characters as any ghostly presence.

Mia Gartner loves her job, but not the two-hour commute. So, moving to Six Minstrel Run—a spacious house in a charming little town only a short drive from work—seemed ideal. And, though the low asking price hinted at issues, the surveys came back clean. Dismissing her odd sense of foreboding and the rumours of supernatural infestation, she tries to settle into her new life. However, she quickly realises something resides in the house. Her immediate impression is of a lonely little girl; but the local preacher’s faith and her husband’s research raise the question whether it is something dark and deceitful.

While psychic powers and questions of the afterlife feature in many of Cox’s books, they are greatly more prominent here, forming the centre of the narrative. They are also set in the context of the real world rather than a cyberpunk future. This book is therefore much closer to a traditional ghost story than an action thriller with speculative metaphysics. However, Cox’s description of both character and the mystical is equally adept when applied to the modern world, making it likely fans of his other works will still find something to enjoy.

Ironically, this skill in grounding the unusual in the plausible is what also creates the aspect most likely to put some readers off: forthright Christianity. The all-to-real portrayal of a strident preacher and his congregation determined to save the Gartner’s souls from the wiles of Satan at any cost contrasted with a polite and helpful paganism might raise unpleasant memories in those who have been subjected to dogmatic evangelism while also seeming a thinly veiled attack on the Church to others.

However, as with Cox’s other books, this is not a book built around a shallow binary: while both the spirit and the pagans present as more pleasant that the Christians, there is substantial evidence of both darker forces and hidden motives that raises the question whether the preacher is a flawed person yet also right about the need for the Abrahamic god’s intervention.

Paralleling this conflict over the meaning and appearance of good and evil, Mia and her husband struggle with his interest in the paranormal; while he loves her and wants her safe, his desire for evidence of supernatural activity tempts him to embrace mostly harmless manifestations rather than place Mia’s interests first at all costs.

Mia is a well-crafted protagonist. A mature adult, but lacking any experience specifically relevant to the paranormal, she exhibits a plausible confusion of what is happening and the underlying truths; neither a credulous embrace of child ghosts nor a sceptical fixation on any hint of deceit, her reaction to the paranormal is likely to seem reasonable to readers whatever their assessment of the evidence.

The supporting cast are similarly complex, their behaviour shaped by the complexities of their experience but not slavishly constrained by it.

Overall, I enjoyed this book. I recommend it to readers looking for a nuanced ghost story, who are not put off by negative depictions of Christianity.