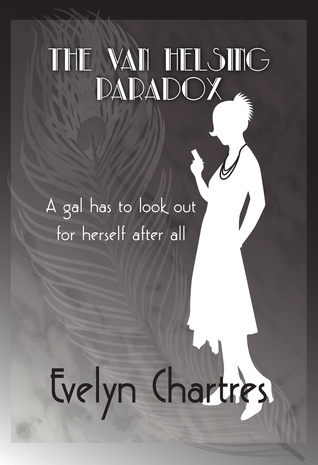 Chartres fuses ancient conspiracies within the Church with urban fantasy to create a fast-paced horror adventure that doesn’t lack for depth.

Clara Grey’s family live in decidedly ungenteel poverty in a small mining town; a poverty that slides toward destitution when her father dies. Everyone says his cough finally got him, but Clara is certain she saw fresh blood and ragged bite marks. When a creepy stranger turns up on the doorstep, she is convinced the monster has returned; however, her attempt to uncover it ends without evidence when her mother dies. Taken in by the Church, she believes it is charity; instead she is discovers a secret order dedicated to fighting monsters; an order she might do well in, if she can accept the cost.

Chartres provides a familiar yet fresh take on a secret order within the Church, providing the conflicts between the good of the individual and the good of humanity, and between faith and expedience, that readers familiar with 7th Sea’s Die Kreuzritter and other religious assassins will enjoy while maintaining a sense of joy that is often absent from such bleak dilemmas.

A major part of this comes from the significant portion of the book that follows Clara’s training, from prankish child, through slightly arrogant teen, to experience-hungry young adult. These trappings of humour and perceived immortality that pervade the revelation of occult danger set the stage for a lighter, more witty cynicism than the more common grim determination that underlies a hidden struggle against evil.

Indeed, the segment prior to her recruitment is arguably the least representative, set as it is in the world of a grieving pre-teen who must surrender the freedoms of childhood to help support her family. Readers who are unsure after the opening scenes might therefore find giving the benefit of the doubt pays off.

As befits a story centred on Catholic monster hunters, faith and the trappings of Christianity have power against vampires and some other creatures; however, Chartres makes this a curse as well as a blessing, as the discomfort the faithful produce in vampires also makes them noticeable to vampires, making it harder to stalk them covertly.

However, this is not a simple Christianity vs the damned narrative; some of the equipment used draws not on religion but on the borderline of magic and science, raising the question whether it is religion itself or the belief that religion works that is effective.

Clara is an engaging and sympathetic protagonist. Drawn into the order by circumstance rather than faith, she is torn between the visceral drive to survive and clasp any pleasures she can that her childhood instilled, and the moral drive to counter the evident threat that vampires and other creatures pose to humanity. This struggle becomes more powerful as her first forays outside the Order’s sanctuary reveal a decadent world vastly more enticing than cold stone and nuns habits

The supporting cast both support and expand these conflicts between self-interest and altruism, morality and expediency. A belief in the cause armours some against supernatural seduction , but for others taking joy in life proves a stronger protection against corruption than the knowledge the battle is righteous. Some monsters are hideous parodies of self-indulgence, others seem to offer a greater opportunity to do good than remaining faithful.

Overall, I enjoyed this novel greatly. I recommend it to readers seeking an engaging tale of vampire hunting or the complexities of saving humanity secretly.

4 thoughts on “The Van Helsing Paradox by Evelyn Chartres”