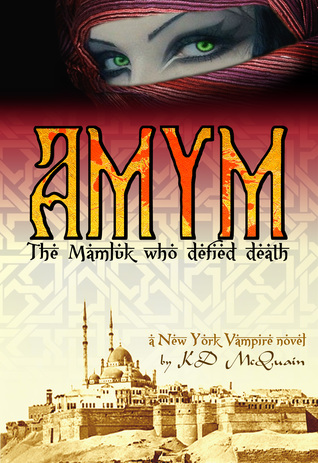 McQuain places the traditional tale of a person struggling to cope with vampirism in Nineteenth Century Cairo, creating a fresh perspective on the vampire tale to match his previous novel.

This novel is a sequel to NYV: Punk. Potential spoilers ahead.

The French driven back, Egypt seeks to embrace its place in the Nineteenth Century as a free and powerful nation. As part of this, the pasha of Cairo hosts a grand feast for the Mamluks to discuss their aid in future campaigns. Amym, a former slave turned respected soldier, seeks to use the promotion this agreement will bring to free the woman he loves. Instead, treachery drives him into the desert and into the clutches of an ancient vampire.

As McQuain’s own introduction states, this book is a spin-off from the main series showing Amym’s mortal life and first encounter with vampires. It opens during the scene in NYV: Punk where Christian first spends the night in Amym’s apartment. As such, even readers unfamiliar with the series are left in no doubt that Amym not only survives but becomes a vampire. However, by focusing much of the narrative on Amym’s life and dreams before his first encounter with vampires, McQuain invests the reader in that possible life, leaving the question of whether Amym can maintain a measure of human interaction—and if so, how much.

Although the novel doesn’t leave this question hanging, the ending is somewhat abrupt if not considered alongside Amym’s dialogue in NYV: Punk. Therefore, this book might be better suited to those readers seeking depth on McQuain’s universe than those visiting it for the first time.

Shifting almost immediately from modern-day New York to 1811 Cairo, the narrative soon jumps back again to Amym’s childhood. As both the original framing device and the subsequent flashback are powered by plausible reminiscence, readers are likely to find this second jump an engaging way to provide context rather than forced exposition.

Where McQuain’s integration of background is perhaps less skilled is in the language, culture, and history of Egypt from the late Eighteenth to early Nineteenth Centuries. He displays solid grasp of the time, describing historically accurate terms and events, however—as in NYV: Punk—these are often followed by an explanation; while this fitted—or even supported—the naivety and isolation of Christian as a narrator, having a character who has grown up immersed in the area narrate meanings to himself feels less plausible.

Despite this potential over-narration in places, McQuain crafts a fast-paced narrative with personal stakes that will engage even readers who feel as grim sense of inevitability the moment they hear Mamluk and Cairo in the same sentence.

Amym is an engaging protagonist, shaped by his upbringing and culture but not enslaved by it. Thus, although his choices are not always moral or optimal by modern standards, they feel plausible and sympathetic.

The supporting cast are similarly products of the interaction of tradition and modernization that occurred on Egypt during the 1800’s, and of the cultural rules of both Islam and tribalism. Again, this produces characters who seek empathetic goals in ways that fit circumstance.

Overall, I enjoyed this novel. I recommend it to readers interested in vampire transformation stories different from the usual European setting, or those interested in the background of McQuain’s world.