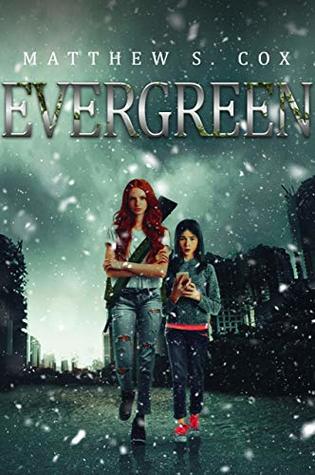 Cox builds a very personal narrative on a foundation of modern science to create a post-apocalyptic story that captures the scale of nuclear devastation without losing its human impact.

Two months ago, nuclear missiles struck towns and cities across the United States. Far enough from the nearest target to survive the attack, seventeen-year-old Harper Cody and her family hid out in the basement. A prize-winning marksperson, Harper thought she knew how to use a gun; however, when a marauding gang broke in, she froze, leading to the death of her parents and the loss of her home. Determined to protect her younger sister, she grabbed her and ran, hoping rumours of a safe haven in Evergreen are true.

This novel lies at the hard end of post-apocalyptic tales. While Cox favours accessibility and emotion over precise detail and scientific nuance, he fills the narrative with personal experiences of a modern-day nuclear aftermath rather than stasis tubes and miracle cures.

Absent secretive cabals and maddened AI’s, the challenges of this book are those of survival in a world where habitual civilisation has suddenly ceased: finding food that’s safe to eat, avoiding the no-longer-minor issues of wet clothing, establishing trust with strangers when there isn’t a legal system to protect and steer conduct.

Due to this focus on mundane risks and consequences, this book might not be suitable for the younger end of young adult readers. Although Cox neither explicitly mentions it nor has it occur to Harper, there is a tacit reference to gangs committing sexual assault in addition to stealing and killing.

Ironically, the realism might also irritate some mature readers. Harper feels guilty for not shooting the ganger who killed her father. As befits the psychology of both those who have suffered a traumatic event and teenagers, Cox therefore has her return to that moment repeatedly, both when facing potential danger and the opportunity to allow others to protect her. While this is a finely crafted portrayal of distress, it has the same obsessive pattern as young adult protagonists with unspoken romantic issues, so might start to grate on readers who prefer their protagonists less self-doubting.

Harper is a well-written protagonist, both for the story and more broadly. The balance of great skill at target shooting with a kind demeanour makes both her theoretical competence in combat and her drive to avoid it plausible.

The supporting cast are similarly skilfully crafted. Each of them displays some aberrant trait due to the attack, but these are a mix of denial and expansion, leading to characters who are nuanced yet recognisable, and both more and less trustworthy than they might seem at first.

Overall, I enjoyed this novel. I recommend it to readers looking for a hopeful yet realistic portrayal of the aftermath of an apocalypse and its impact on the mind.