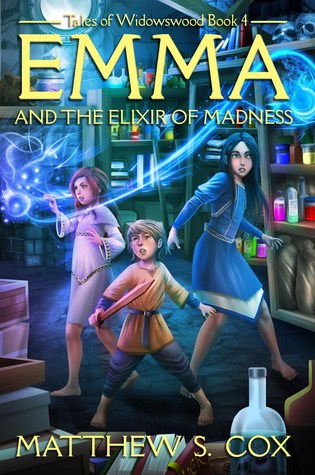 Cox continues to blend the excitement and strangeness of fantasy with the lightness and smaller-scale of middle-grade fiction, producing a tale that grips the reader without instilling terror.

This book is the fourth in the Tales of Widowswood series. Spoilers may leap from the undergrowth.

Strange transformations and embarrassing events are disturbing the peace of Widowswood Village. Emma, recalling tales of night pixies, worries that its only the start of a plague of curses. However, as the effects are both humorous and short-lived, her mother doesn’t take it seriously, and her father is focused on the disappearance of a merchant’s daughter. Worse, the town bully who does believe there’s something dark going on also believes Emma is responsible. Emma is determined to track down the real cause, but chores and curfews keep getting in the way.

As with the previous volumes in the series, Cox crafts an engaging middle-grade fantasy that is likely to be equally enjoyable for more mature readers, featuring plot and language that are simple without being simplistic.

This balance between respecting the innocence of potential readers and honouring their desire for meaningful plot can be seen particularly in the magical distresses that afflict the village: the many of the curses impose only risk of discomfort and embarrassment, such as the chickens that are inflated into floating balls then suddenly deflate in a gust of flatulence; however, Cox also mentions the unfortunate consequences of the same weightlessness followed by deflation on a flightless animal, showing that not everything is just good fun. This confirmation there might be consequences leaves more innocent readers to enjoy the ribald humour of a bully forced to keep his head in a bucket, while allowing more experienced souls (Emma amongst them) to realise there is real danger if this isn’t stopped.

Cox’s portrayal of pre-teen rural life is equally skilled: readers of all ages are likely to recall the frustration of parents who imposed rules and didn’t seem to listen; and even those who have accepted that their parents were probably in the right will feel tension here from seeing the objectively important matters that Emma is trying to resolve.

Cox similarly neither skimps nor over-simplifies that other core thread of pre-teen life: social strata. The children of the village are—entirely realistically—not paragons of empathy; they bully, shun, disregard, and obsess almost on a whim yet cleave to beliefs in defiance of evidence. Yet they display a capability for change that avoids creating a sense of bleakness or futility.

Emma remains a sympathetic protagonist. Her experiences in prior books have both matured her and given her a greater ability to act; this leaves her caught between the sense of responsibility that says she should obey her parents and do her chores, and the sense of responsibility that says she should help people if she can help people. Cox carefully balances these drives, providing ample evidence that she is worthy of the trust the spirits grant while also granting her impulse control and self-assurance fitting for a ten-year-old.

The supporting cast are also nuanced and fitting for the book, described by the traits and behaviours a child would notice, but also displaying hints of the person beneath for more mature readers to discover.

Overall, I enjoyed this book. I recommend it to readers seeking fantasy that is suitable for younger readers without being simplistic or anodyne.