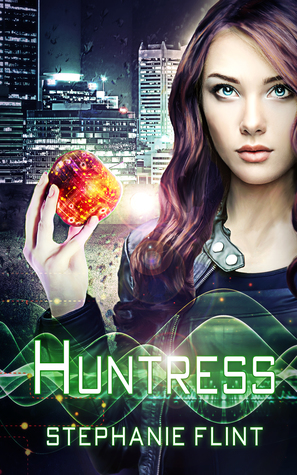 Mixing the most superficial of events, a beauty contest, with the enduring question of when means justify ends and a young protagonist, Flint creates a cyberpunk tale that will appeal to both fans of techno-thrillers and young adult dystopias.

Koenigin Corp offers augmentations and nanite treatments that can cure someone’s ills or make them better than human; and they offer them for free to anyone who asks. Yet some people choose a life of sickness, squalor, and criminality. Verdi is a huntress, an enhanced agent tasked with protecting the corporation from espionage and anti-corporate conspiracies; and the adopted daughter of its president. So, when the corporation informs her that the Society for Natural Progression, a rabidly anti-corporate political group, have fixed the voting in a beauty contest, Verdi agrees to scar their candidate so the corporation can fix it for free as proof they provide a benefit to society.

Flint crafts a plausible world of easy biological and mechanical enhancement and corporations that are almost separate nations that is likely to appeal to both fans of classic cyberpunk and those of young adult dystopia.

As with several of her other works, both the enhancements and the use of the weak as tools by the powerful verge on body horror; however, in this case, evidence of the general good done and specific reasons for Verdi to accept it are clear from the start making Verdi’s perspective more accessible than some of Flint’s bioengineer protagonists.

While readers are likely not to share Verdi’s unquestioning belief in the corporation’s virtue, Flint plays the game straight, providing only the evidence that Verdi discovers and thus maintaining the question over whether, in this instance, things are actually as the protagonist believes.

Where the struggle over the proper place of corporations continues, the one over sexuality appears long in the past. Although people display romantic interest in people of their own gender, these acts warrant as little page-space as the most respectable of heterosexual relationships in a modern novel.

Verdi is a sympathetic and engaging protagonist. Her background as adopted daughter of an immensely powerful biotech and cybernetics magnate make both her naïvety over the experience of the disadvantaged and her fervent belief that the corporation is fundamentally good, highly plausible. However, she is not simply an unthinking foot soldier; she is aware that the difference between brutality for the corporation and against it lies in possible excuse and not in justification; and attempts to highlight those things she considers imperfect in the corporation.

The supporting cast are similarly nuanced: those who see a different future than the rule of Koenigin’s president, or her specific plan for rule, do so out of a variety of reasons, some altruistic, others self-serving; and those who oppose the corporation act from a range of practical and philosophical drives, not all apparent on first meeting. This creates both a plausible picture of a world filled with distinct people and a social framework to highlight Verdi’s potential naïvety.

Overall, I enjoyed this book. I recommend it to readers seeking fast-paced cyberpunk action.