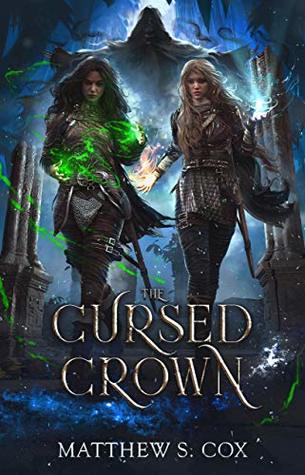 Cox smoothly blends questions of metaphysics with grimy fantasy and diverse characters to create a young adult tale that is both deep and fast-paced, uplifting and realistic.

This novel is the sequel to The Eldritch Heart. As Cox himself says at the start, sharp pointy spoilers ahead.

With the twenty-five-year war against Evermoor over, King Aodh Talomir’s deceit uncovered, and Kitlyn revealed as the true heir to the throne of Lucernia, Oona expects her greatest problem to be marrying despite the objections of those who consider lesbianism impure. However, when Aodh chooses to end his life rather than face the disgrace of being censured by the priesthood, the two sixteen-year-old girls have the weight of rulership thrust upon them. With reactionary forces seeking to overthrow them, mysterious attacks on both sides of the border threatening peace with Evermoor before it has even been formalised, and no previous monarch having lived into old age, Oona cannot escape the idea that the crown is cursed.

As with the previous volume, Cox opens with a series of day-to-day events such as preparing for the wedding and sitting through royal audiences filled with the minutiae of economics and etiquette. This tedium both serves to portray the inertia of a nation and to firmly ground the plot in realism by showing that heroes do not become skilled monarchs merely by dint of being good people.

This focus on the repercussions of events in the previous book and how much simpler life was in some ways for Oona and Kit when they were questing also allows Cox to reprise matters that might be relevant later without risking the distancing effect of prologues or other overt exposition.

Where the first book addressed Kit and Oona’s realisation of their sexuality and their fears of rejection by each other, this one deals with the broader fear of public rejection. Despite the apparent support of the gods, the idea that same-sex relationships are unclean is embedded deeply into Lucernia’s psyche, both causing people to display varying degrees of discomfort with the new monarch and her wife, and causing Oona and Kit to assume people’s reaction will be worse than it is. Cox skilfully shapes these interactions in line with characters’ broader personalities, making interactions more than a simple approve or not, from those who fanatically disapprove, through those who disapprove but strive not to let it interfere with doing their duty, to those who display opposition because they fear ostracism by reactionary families if they do not. Similarly, those who do not disapprove act from varying degrees of tolerance and acceptance.

While the theme of discrimination is clear in this novel, enhanced by citizens of other nations being somewhat confused or amused at the prohibition on same-sex relationships, it is not the driving force of the book. The threat of violent overthrow for “impurity” is real, but the average degree of challenge to the relationship is no greater than that of a heterosexual marriage between teenagers, both giving the book a pervasive feeling that those who are attracted to their own sex are not destined for unhappiness and avoiding turning the book into a political statement rather than a diverse entertainment.

Tightly woven with the social reactions to lesbian marriage are broader questions of true faith and religious commandments: if the previous High Priest lied about what their god’s commands were then can people trust that those who claim to speak for a god are telling the truth this time? If the gods intervened to support Oona and Kit but didn’t expose Aodh, then is non-intervention as sign of disapproval or of allowing humans to resolve the issue themselves? This turmoil is further stirred by a plausible uncertainty over Evermoor: mere weeks before everyone knew they were demon-worshipping savages, now they are supposedly unjustly treated members of a civilised nation.

Balancing the very powerful yet ephemeral matters of politics and religion, Cox also provides a thread of classic physical threat, first to outlying villages but creeping closer, tightening the pace further and adding action to balance the discussion.

Oona and Kit continue to be well-crafted protagonists, overcoming obstacles by virtue and competence yet also challenged by both their lack of experience and youthful passion. Perhaps cruelly, Cox makes them not only compassionate enough to see many injustices that need fixing but also wise enough to realise that their nation cannot take too much change too quickly; thus, they must face that acceptance of their love is in competition with bettering the lives of others.

The supporting cast are a pleasing balance of accessible trope and nuance, allowing for the lighter strokes of description that draw the plot onward without losing the detail that make characters plausible and engaging.

Overall, I enjoyed this novel greatly. I recommend it to readers seeking young-adult fast-paced fantasy, especially those interested in a diverse cast.