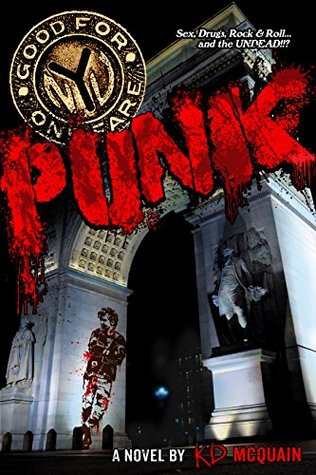 Fusing one of the archetypal devourers of life with a culture defined by the raw expression of being alive, McQuain creates a visceral take on both vampirism and modern society.

Palestine, Texas, is as far from metropolitan excess as one might get. Yet even that rural isolation is too polluting for Christian’s mother to allow him out of the house. Taking advantage her monthly shopping trip into town, he sets out on an old bicycle to explore his surroundings. However, first misfortune and then choice turn a few hours freedom into an overnight excursion and then a journey across the country. After surviving a random attack in a bus-station bathroom, he falls into the New York punk and hardcore scene. Life is hard for all of his new friends, but Chris is also plagued by nightmares of his attacker; nightmares that might be visions of true events.

McQuain uses an explanation-heavy narrative style, sometimes to the point of bracket definitions of terms. This allows the prose to reflect the appropriate density of slang in a counterculture without burying the reader under a burden of inference, so is likely to make the book more accessible to those without a background in New York punk.

However, this ease of understanding also isolates the reader from the confusion that people often face in real life when encountering an alien subculture, so works against McQuain’s efforts to portray Christian as a lost innocent struggling to fit in.

This potential disjunction of style and subject aside, McQuain skilfully evokes the crude vitality and mix of pragmatism and idealism that both punk and adolescence lived on the streets display.

The metaphysical half of the story is also both fresh and raw: as the title reveals, there are vampires; however, rather than hungering corpses or urbane lovers based on Eastern European legend, they are pre-Columbian horrors, embodying both the brutality and fanatical self-justification of human sacrifice. In addition to providing an interesting shift in origin and style of vampirism, this shift from cursed to sacred provides a plausible reason for Christian to be connected after surviving an attack without also becoming tainted.

There are also intimations that Christian is special for reasons other than his brush with vampirism or the usual exceptionalism of protagonists; certain aspects of his mother’s world view are confirmed later in the story. Unfortunately, this mystical resonance that Christian possesses receives neither the level of explanation nor the impact of other areas; thus, some readers might feel it crosses the line from broader arc into deliberate sequel bait.

This dangling thread aside, McQuain balances action and metaphysics, creating a story that has depth in both the metaphysical and the mundane without sacrificing pace.

Christian is a sympathetic character. While naiveté and pragmatism both lead him into less than legal situations, he doesn’t succumb to laziness or selfishness making him at worst the equal of many roguish protagonists and with arguably better cause.

The supporting cast of punks, straight-edgers, Goths, and street kids are similarly rough yet engaging, displaying the varying balances of brittle pretence and embraced difference that mark a burgeoning subculture built by the socially excluded.

This conscious effort at showing difference and disdaining normality is absent from those characters with mystical knowledge; like all who have power, these display no care about the opinions of others or justifying their actions.

Overall, I enjoyed this book greatly. I recommend it to readers seeking a gritty vampire tale or a perspective on American punk.

I received a copy of this book through a community offering free review copies of books.