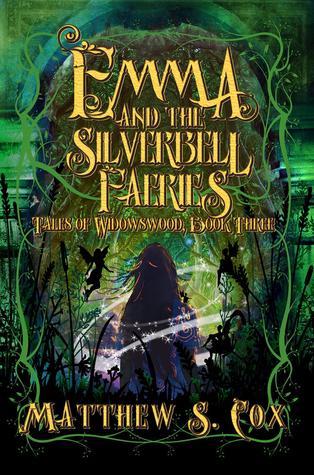 Cox crafts a fantasy adventure from viewpoint of a ten-year-old without losing the sense of nuance and complexity that many fans of adult fantasy seek.

This is the third volume in the Tales of Widowswood series. Spoilers might lurk ahead.

Emma’s parents have forgiven her for worrying them and her punishment is over, yet she still can’t forgive herself for trying to solve everything herself. However, when Neema—the faerie she freed—claims that faeries are dying, that only Emma can save them, that there isn’t time to ask her parents, and that it will only take a few minutes, Emma agrees to follow her. Only to discover that she’s not in the Widowswood any more and that faeries have a different idea of what ‘a few minutes’ means.

As with the previous Widowswood books, Cox blends the tropes of fairy tales with a realistic portrayal of the life of a young girl, creating a plot that is filled with excitement and the fantastical while still feeling immediate and relevant to middle-grade readers (and above). This sense of living a fairy tale rather than merely listening to one is further enhanced by details that exist in real life but are often missing from stories, such as varied meals and the griminess of village life.

Indeed, the authentic filth is likely to be one of the strongest draws for certain pre-teen readers who also enjoy (or are pleasantly horrified by the thought of) getting really muddy.

Cox’s silence on issues equally enhances the emotional power of the book. Many of the obstacles Emma faces on her quest are described as threatening without the reason being given, making the level of danger echo the imagining of the individual reader and thus always feel scary but not horrifying whatever the reader’s threshold. While this effect is likely to be weakened for adult readers, a more mature understanding of risk will equally make certain things feel more dangerous than the characters realise.

While the book as a whole is likely to engage a wide-range of fantasy fans from pre-teen to adult, one aspect that might divide readers is the dialogue of the faeries: most sentences are delivered with the words in the wrong order. As the book continues, there is some sense of an underlying structure and Cox does eventually provide an explanation for both the ordering and why not all faeries exhibit it; however, readers who found Yoda’s speech annoying rather than amusing might become tired of a cast of such speakers before reaching that point.

Emma continues to be a well-crafted protagonist. Her adventures in the previous two books have granted her both greater abilities and greater maturity, allowing her to face challenges with confidence but also resulting in both her being called to face larger challenges and her realisation that ten-year-olds (even ones with druid powers) have limits they need to respect. This greater uncertainty over whether she should act or can succeed balances her improved abilities, making her heroic without becoming annoyingly perfect.

The supporting cast have similarly grown more complex—or provide a contrast by remaining the same. Adults and some children display behaviour that, while consistent with previous actions, casts them in a more nuanced light; whereas other children and many faeries seem almost mono-maniacal, highlighting Emma’s growing understanding that motivations are more complex than they seem by their lack of it.

Overall, I enjoyed this book. I recommend it to readers seeking a fantasy story that is filled with risk and real consequences while remaining free of grimness and anti-heroics.