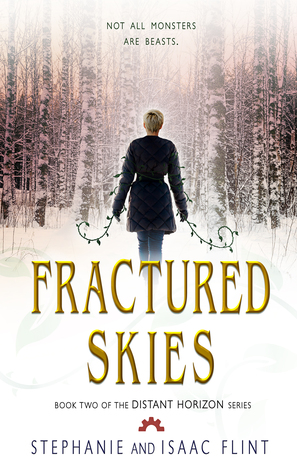 The Flints mix the ethics of regime change, magic, future technology, and teenage angst to create a tale that is both an extravaganza of fantastical events and a nuanced exploration of moral choice.

This novel is the second in the Distant Horizons series, and includes events that happen at the same time as the Glitch trilogy.

When Jenna Nickleson discovered the health checks carried out on every teenager were a lie designed to locate those with psychic powers, either for recruitment into transformation into living tools and weapons, she fled the Community into the arms of the rebellion. At first, this seemed like a sanctuary; however, the longer she spends among them, the more she realises they want to destroy the Community itself rather than merely end the unethical experiments. And worse, during her last mission for the rebellion, a high-ranking telepath planted false memory fragments throughout her mind. With her goals countered by allies and enemies alike, and her actions likely to trigger horrifying visions or inhuman desires, how can she stay true to herself?

Where the previous volume was focused on escaping the threat of a clearly immoral system, this volume takes up the questions of whether rebellion can be purely moral and whether more freedom is always better. As the plot moves between various areas outside the Community, the Flints provide pictures of farmers struggling against harsh conditions and prosperous areas tainted by criminal gangs to contrast with the safety and security provided by the—by their own label—evil rulers of the Community. While few will question that turning innocent people into psychic weapons should be stopped, each reader is left to make up their own mind whether the chaos and suffering that existed before the Community was formed is a fair price for having additional liberties that many might not have the ability to exercise.

The book also reveals more of the metaphysics of the world, both increasing the psychospiritual threat to humanity and introducing dilemmas over the impact of time travel. Although a plot focused on political and military conflict between nations is suitably broad in scale to support equally puissant mystical issues, some readers might find the faction who believe the world is a game tips the story from science fantasy to implausibility.

However, the Flints don’t allow the philosophical issues to overwhelm the story; this is also an fast-paced action thriller.

Jenna is a sympathetic protagonist. Her struggles, while stemming from the classic YA protagonist issue of a world filled with people who just don’t get it, are of objective significance, making both her dogmatism and uncertainty feel sensible rather than indulgent or naïve. Unusually for a teen protagonist, her romantic issues also stem from too strong a focus on the long term rather than a failure to consider it.

The supporting cast are similarly based around familiar tropes without feeling stereotypical.

Overall, I enjoyed this novel. I recommend it to readers seeking young adult science fiction that focuses on action and scale.