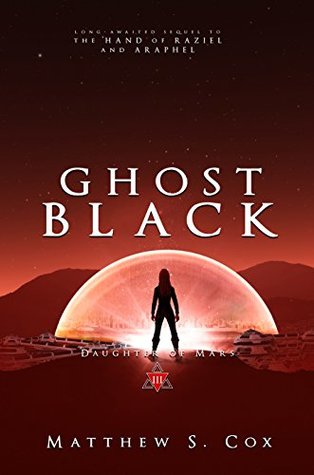 Cox blends speed-boosted cyber-action with more introspective questions about individual and social costs to create a seamless blend of action and depth that is likely to appeal to science-fiction and espionage fans of all flavours.

This novel is the third in the Daughter of Mars series. Displaying this review might corrupt surprises in previous volumes.

After the discovery that Raziel, the Martian Liberation Front, and both her real and adoptive fathers aren’t what they seem, Risa Black has reassessed her life. Instead of the vengeance she sought when young, she wants a normal life with Pavo; and even more, she wants to keep her adopted daughter Kree safe. However, her bosses are less in favour of her walking away and various enemies old and new want her dead. So Risa must choose: what—and who—is she willing to sacrifice for family?

Cox weaves the revelations of the previous two volumes into two narratives: an increasingly complex shadow-struggle between multiple entities across both physical and social battlefields and Risa’s personal struggle to find firm ground among the deceits and shifts of that war. With Risa’s feelings toward individuals not always aligning with her feelings for their bosses and further levels of politics and lies emerging at every turn, these two threads often pull in opposite directions, creating a story about trying to choose the least worst rather than best result.

This shift from Risa’s idealism at the start of the first book to almost cynical realism is mirrored by broader events questioning whether freedom fighters would produce a better government if they did win and whether true selflessness even exists.

While the novel does suggest questions about social change and coherence, it is also filled with full-on metal-to-the-max fights and stealthy infiltrations, providing plenty for readers who like their thrillers fast-paced and claustrophobic.

Cox brings both Risa’s and the MLF’s arcs to a significant conclusion, so—although there are ways to bring Risa back—this book has the feel of a final volume.

Risa continues to be a well-written protagonist. When she was part of an underground movement to liberate Mars, defining herself as “not an assassin” provided a firm touchstone; however, now she has found the person who killed her father and no longer wants to be part of the MLF, saying one thing she isn’t isn’t enough to define who she is; especially as assassinating a few key people is potentially both the easiest way and the only way to avoid harm to innocents. Her emotional struggle both before and after the event puts a twist on the aphorism: instead of being a person with a hammer who sees everything else as a nail, she doesn’t want to see everything as a nail but doesn’t know how to do anything other than hammer.

The recurring cast are similarly complex. Those who have been revealed as not who they initially seemed retain their same personalities, both mixing in the reader’s existing feelings about them with their feelings about their “true” masters and creating a sense that if someone who seemed to be who they claimed to be has fooled the reader so thoroughly, then can any of the characters who seem straightforward be trusted either.

In keeping with the claustrophobia of a spy story, Cox doesn’t give much page time to new characters; however, even nameless characters who appear for less than a scene have nuances that give a sense of a wider world beyond Risa’s concerns.

Overall, I enjoyed this novel greatly. I recommend it to readers seeking cyberpunk thrillers with depth.