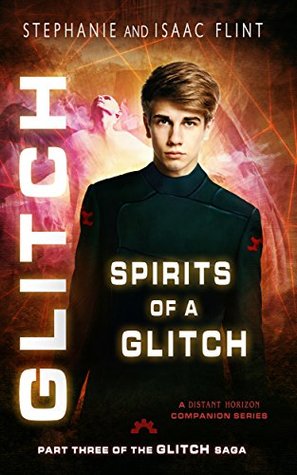 The Flints mix telepathy with a tale of an innocent caught up in politics to provide a powerful depiction of post-human paranoia.

This is the third volume in the Glitch trilogy. Spoilers off the port bow!

Following his success at removing glitches from the Legion Spore, Tim Zatsev is tasked with doing the same for the Manticore, the second of the Council’s living fleet. At first, it seems his insight provides a head start on solving problems. However, with the mass of shapeshifters fused into the Manticore significantly greater than that of her sister ship, the struggle for control is an order of magnitude harder. Hard enough that Tim fears losing.

As with the previous volumes, the core of this story is a nineteen-year-old techno-psychic fighting to bring to heel a mass of people who have been fused into a giant airship. And, as before, the reader is not presented with any evidence that the Council are undertaking widespread bioengineering of humans into slaves for other than political reasons. Therefore, while some readers might recall a sufficient justification for the brutalisation from a previous book, others might find it hard to care that the Manticore wishes to break free of its masters or even destroy them.

This unfortunately, undercuts the tension of Tim’s struggle: while readers may well not wish Tim personally to suffer, his angst over how to save a group who are happy to brainwash and mutate humans for their own purposes can be hard to empathise with.

This potential difficulty aside, the Flints skilfully increase the paranoia that was evident in previous volumes. With the Manticore containing both telepaths and suggestives among its fused structure, it is technically capable of knowing what Tim plans, subverting communications, and planting false memories. Thus, Tim cannot be sure that evidence he gathers of problems will be believed or even transmitted.

In parallel with the psychic issues, there are potential issues with the code that controls the mechanical sections of the ship. Tim’s ability to control technology theoretically grants him an edge in resolving this, but interfacing mentally risks opening himself more to the control of the powerful gestalt mind that the Manticore has become.

Although the authors term this the conclusion of the trilogy, and it does end with a resolution, it doesn’t conclude all the arcs so might not utterly stand alone from other series in the same universe.

Tim is a sound protagonist for this plot. While his youth and inexperience result in the emotionalism common to Young Adult protagonists, his naïvety also creates a greater sense that—whether or not the Council as a whole are justified—he is worthy of sympathy.

With the majority of the book focused on Tim’s struggle against the Manticore, the supporting cast have very little direct page time and for much of that there is the possibility of psychic influence. However, such presence as they do have feels consistent with the previous volumes and the tone of this one.

Overall, I found this novella enjoyable. I recommend it to readers seeking bleak young adult science-fiction.