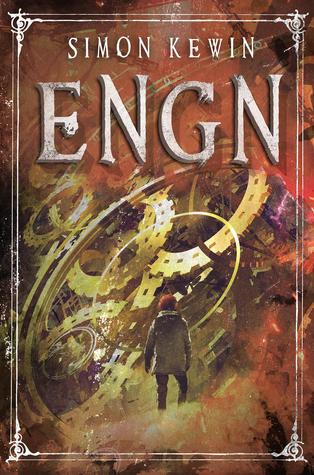 Echoing the social schisms of the Industrial Revolution without sacrificing pace or visceral threat, Kewin forges a steampunk thriller that connect with both the mind and the heart.

For as long as anyone in the village can remember, the machine-city of Engn has taken children, no more than one per family, to feed its constant need for workers. Finn was too young to really understand when the Ironclads took his sister for the city, but he understands all too well when they take his best friend Connor. Putting aside his pain, he focuses on finding his place in the village. Until Engn, need for workers growing with its walls, breaks the one-child agreement and takes Finn too. Years before, the boys had sworn that if they were taken, they’d work to destroy Engn from within, a pact that brings Finn hope during his journey. But, with the city a sprawling mass of machines and tunnels and many of the residents happy with their lot, how can he find Connor, and if he does, will his friend still keep a childhood promise?

Overall, I enjoyed this novel. I recommend it to readers seeking steampunk that focuses on technology and society.

Kewin builds his plot around a classic trope: pastoral craftspersonship vs faceless industrialism. The villagers each perform the entirety of a task and understand how they fit into the lives and tasks of others; whereas Engn is filled with people performing a single step in the making of parts they don’t understand. However, rather than simply retelling the Industrial Revolution, Kewin dials the conflict up: youths are taken by the city rather than moving due to economic pressure; the entire city is a warren of inexplicable machinery and arcane processes rather than a mix of factories and more universal areas such as taverns. This contrast between bucolic childhood and mechanical semi-slavery creates a strong thread of paranoia.

However—despite seeming an ordinary farming community on the surface—the village has electricity and the equivalent of a telephone network, preventing the novel from sliding into a simplistic anti-technology parable.

The villagers also make no real effort to stop their children being taken and sometimes mention a “Clockwork War” in the distant past, creating a sense that perhaps Engn serves a useful purpose, or at least did in the past.

This uncertainty builds and spreads once Finn reaches Engn: parts seem actually impractical rather than just incomprehensible; workers in different areas believe different things; and higher-ranking citizens are supposedly appointed based on competence but are rumoured to be appointed based on lineage, and reveal no provably better understanding of the machine as a whole. And those workers who don’t accept Engn is right gossip about Wreckers and the damage they have done to the city, but have only rumours rather than access to an actual network of revolutionaries. With the intention, and even the existence, of a guiding hand for either side of the struggle in doubt, the reader is left to decide for themselves who is on the side of right.

Finn is a well-crafted protagonist. Bright but not bookish, he isn’t prepared to simply accept his place in the machine but isn’t able to easily judge whether something is purposeless or has a purpose he doesn’t understand; this provides a clear drive to act rather than react, but also causes him to act when waiting might be better.

The supporting cast are similarly suited to the air of the book: dullards live out their lives in contentment; bullies take out their issues on the weak rather than pushing against the city; and those with a sliver of power or understanding cling to privilege more often than strive for the common good.

Overall, I enjoyed this book greatly. I recommend it to readers seeking steampunk that focuses on plausible technology and society in addition to character.