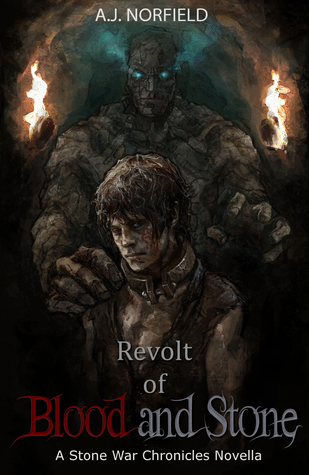 Norfield blends the classic tropes of prison fiction with those of dark fantasy to create a solid tale of claustrophobic rebellion.

Sebastian was kidnapped and forced to work in the mines. Now, after years of backbreaking labour without ever seeing the sun or feeling the wind, he chances across a conspiracy to escape. He desperately wants it to work, but—with informing on other prisoners the only way to gain any respite from the brutality—the conspirators aren’t willing to trust him with further details. And, even if he can convince them, how can a malnourished rabble defeat trained soldiers and the magic that supports them?

While this novel was written as a prequel to Stonecatcher, Norfield opens with sufficient description of the protagonist and the world that readers new to the series will not feel lost; but also embeds that sufficiently in character’s reactions to events that those familiar with the series are unlikely to feel they are wading through things they already know.

Norfield similarly focuses more on how the characters overcome obstacles rather than which rumours of the outside world are true, maintaining a sense of uncertainty that will not be overwhelmed by any knowledge of characters surviving or rumours being true gained from having read the main series.

From the first page, this is a brutal world: not only are prisoners trapped by mine collapses are abandoned and punishments draconian, the overseers take young children off for an unknown by seemingly bloody fate. Although Norfield does not indulge in bloody detail for the sake of it, readers who dislike horror might find some scenes distasteful.

Unfortunately, this skilled creation of the visceral reality of prisoners being worked to death by an evil regime is slightly undermined by aspects of the narrator’s voice. Although it is not impossible that the young son of a trader might have received an excellent education in addition to working on a merchant ship, the lack of contractions and other nuances of tone feel more like someone focused on etiquette or intellectual precision rather than someone who was kidnapped when young and has performed exhausting labour for years in crude tunnels. However, this sense of a narrator who has time and energy is not enough to overcome the immediacy of events once the escape plot gets moving.

Sebastian is—any initial dissonance of narration aside—an engaging protagonist. He is decent enough that readers will both sympathise with his plight and root for his success, but neither a saint nor a superman who is unchallenged by his own flaws.

The supporting cast of prisoners are diverse, and possessed of a plausible range of abilities and apparent loyalties, allowing for a pleasing level of paranoia in the narrative without losing the fundamental core of action.

The guards on the other hand appear as classic minions of an evil overlord, down to the sadistic yet highly competent general. However, this lack of human nuance is entirely consistent with the narrator’s chronic oppression.

Overall, I enjoyed this book. I recommend it to readers seeking fast-paced fantasy set in a grim world.

I received a free copy from a Goodread’s community in exchange for a fair review.