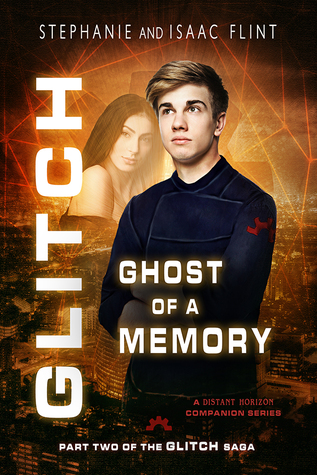 Neither shying away from the visceral horror of reshaping humans into machines nor descending into shock and gore for the sake of it, the Flints create a tale that will appeal both to fans of young adult dystopia and those seeking a more complex tale than youthful hero against decadent regime.

This novella is the second in the Glitch series. Appositely enough, this review might implant knowledge of former events in the reader’s mind.

Tim Zaytsev, newly appointed Head of Efficiency for the Camaraderie of Evil, divides his time between removing glitches from the Legion Spore, the Camaraderie’s giant bio-dirigible, and trying to understand enough of his other duties to perform them. His success in erasing the memory fragments of the people fused into the ship has brought him the beginnings of respect among his colleagues, but—as each glitch is removed—the ship seems to gain more of a personality; and, worse, Tim’s dreams are filled with apparent memories of an affair with Lady Black, most seductive of the Camaraderie. Deploying the Spore without investigating further could leave Tim dead or worse, but telling the Camaraderie that the ship isn’t ready means revealing what he’s dreamt without knowing if it’s even true.

The Flints maintain the premise and feel of the previous volume, making this a solid sequel. As with that book, reader’s enjoyment of this one will turn fundamentally on whether they accept that Tim both isn’t horrified by the idea of changing humans into living tools and isn’t a psychopath.

Where the first book explored Tim’s fumbling toward a way of removing glitches, this one focuses more on applying that theory to specific issues and whether certain parts of the way the Legion Spore was created might have allowed or amplified the issues. As such, readers who—like Tim—are interested in both the possible result of fusing many humans with various abilities into a single being and the wider metaphysics of the world are likely to find this a satisfying increase in depth.

Of particular note is the exploration of what telepathy might mean for dreams and perceiving reality itself: Tim fully believes the glitches are the result of memories replaying, and knows the Legion Spore can talk in his head; which raises the question whether his dreams and thoughts are a mixture of logic and stress, psychic photographs from former humans, or active manipulation by an outside force.

However, this novella is not solely metaphysics and engineering. Both Tim’s potentially true dreams and his lack of political training raise significant risks that he will either make an enemy of one of his fellow councillors or make a hash of representing the supposedly benevolent and exceptional Council in public. Unlike some YA titles, the Flints do not have Tim suddenly discover heretofore unrealised competence, resulting in a most plausible portrayal of a nineteen-year-old hacker failing to be a world leader.

This social and metaphysical turmoil also impacts Tim’s relationship with his girlfriend and fellow councillor. While this is tinged with the extremism of youthful angst, the dilemma between hiding things from your beloved or telling them you’ve been dreaming of someone else (albeit potentially due to outside influence) is likely to be recognisable to more mature readers, making Tim’s struggle equally accessible to readers who find the dramas of stereotypical YA romance irritating.

As with the plot and world, Tim and the other cast develop consistently, displaying both development and the pernicious influence of existing flaws. As such, readers who accept the idea of granting political power based on psychic ability will find this a plausible mix of late teenagers and adults.

Overall, I liked this book. As both character actions and ongoing plot rely on matters not mentioned, I recommend it to readers who liked the previous volume.