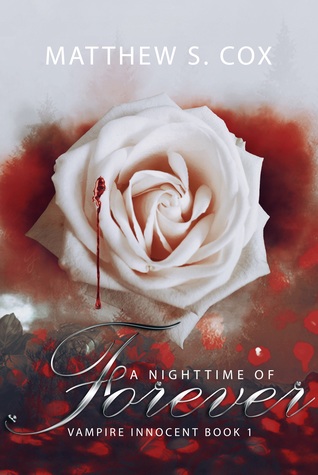 Cox mixes teenage life, classic myths, and humour to create a vampire story that is neither angst-ridden struggle nor night-wrapped superheroism.

After her boyfriend cheats on her, Sarah Wright is twice as eager to start college in California. However, when she wakes up in the morgue a vampire, her dreams of a new life are replaced with a desire to keep the one she had. Reconnecting with her family and friends is surprisingly easy; coping with her parents still mostly seeing her as their little girl is harder, especially when she’s living in their basement. And to make matters worse, her phone is still in an evidence locker and someone is trying to kill her.

Cox applies the same nuanced awareness to teenage vampire tropes that shapes his cyberpunk and post-apocalyptic fiction. There are considerations of romance: but not burgeoning obsession for a mysterious stranger or conflict between two different hotties. There are tensions between teenage feelings of adulthood and adult perceptions of immaturity; but not apocalyptic rows or power-fuelled attempts to prove a point. This creates a highly plausible picture of someone learning to be a vampire: the concerns of teenage life have not faded, but they are displaced by the massive change from mortal to vampire.

Cox’s version of vampirism is similarly tweaked. There are several types of vampires, tidily including all the vampire myths as possibilities, but—rather than becoming the same as one’s creator—the type of vampire a person becomes depends on some qualities in the person that aren’t known, even to the vampire community. This sense of both freshness and tradition is amplified by Sarah’s creator being a wanderer by nature, gifting her a very basic understanding of the condition and the occasional helpful conversation later; but leaving her (and the reader) to mostly uncover what her powers are and how they work.

There are also a number of Cox’s trademark ironies and embellishments: for example, each human smells and tastes like a particular food, but—unlike the valuable insights this would provide in some books—it merely adds a moment of lightness to contrast with the horror of predation.

This uncertainty over which legends are real and which powers might go together also adds the same mix to the plot: at least one someone or something is hunting Sarah and those around her, but their plan and goals are initially unclear.

Sarah is a well-crafted protagonist for a vampire novel: her history of being level-headed (for a teenager) make her both different from many other teenage protagonists and create a firm basis for her challenges to most be with vampirism rather than with life itself. Freshly out of a bad relationship, she also plausibly isn’t in a romantic head space, allowing for an initial exploration of her new expanded world without the overwhelming drama of young love.

Her family and friends are similarly balanced, neither refusing to accept the truth no matter what nor casually settling into it without any issues; as such, while not all readers will find the precise level of acceptance displayed by every character plausible, they are likely to find the whole balances pace with challenge to create a plot that is neither onerous nor flat.

As with other novels, Cox grants even brief characters interesting nuances, both creating a sense that Sarah’s story takes place in a wider world and adding a sense of real impact to each of her decisions to feed or use her powers on a passer-by.

Overall, I enjoyed this novel greatly. I recommend it to readers seeking a fast-paced vampire tale.