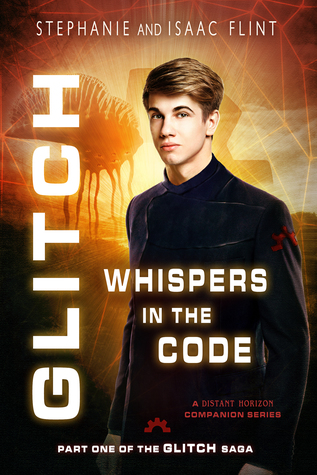 Inverting the trope of an exceptional teenager defying an evil government, the authors craft a tale of a young man struggling to find his place in a tyrannical but potentially necessary regime.

This book is set after the events of Distant Horizon. Risk of spoilers ahead.

Nineteen-year-old Tim Zaytsev fled his home to join the rebellion against the Camaraderie, a tyrannical supranational government. Then he betrayed both the rebellion and his friends to follow a girl to the Camaraderie. But, horrified by the casual sadism of his new superior, he killed her. Imprisoned for his actions, he expects to be killed or worse. Instead, he is offered both her place on the council and a chance to use his superhuman ability with computers to complete her final project: an airship built of mind-linked shapeshifters. At first the elevation seems almost a miracle, but the ongoing threats of both international politics and a network that can trap you in its nightmares might be greater horrors than any sentence.

While the book is described as the first in a series, it is a continuation of Tim’s arc from Distant Horizon, and assumes knowledge of key things mentioned in that book. The narrative opens with Tim facing judgement, but no explanation of who the various groups are or details of why he has betrayed them. As a result, readers who have not read the previous book—or at least not recently enough to remember—may struggle to work out which side is which. This risk is amplified by Tim having moved between the Community, Coalition, and Camaraderie and the authors’ decision to sometimes abbreviate one of these to CoE without clear indication of which this is.

This assumption of prior knowledge continues throughout the book. While this does avoid the implausibility of people discussing things they already know, it also weakens the reader’s understanding of how things fit together, preventing a visceral experience of risks. Therefore, while readers who are merely picking the world up after a break are likely to orient themselves after the opening, this book may not be a suitable entry point for new readers.

Readers who do orient themselves will find an interesting blend of superhero fiction and dystopian thriller. Unlike many young adult novels, this is not a simple question of scrappy revolutionaries defeating an evil regime; there are indications that the consequences of not having strong and strict leadership might be worse than the moral compromises it requires.

This focus on a pragmatism rather than absolutism is likely to either remove or amplify the issue of Tim’s sudden promotion to joint ruler of nations: depending on the reader’s perspective, it is either a sign that youth is not a barrier if one is the best person for the job, or a discordant note of teenage-protagonist exceptionalism in an otherwise complex world.

As might be expected of a young adult story, the majority of the plot is focused on Tim’s immediate dilemmas rather than wider issues. Although there are threads that deal with the political, military, and metaphysical struggle for the world, they often take a second seat to Tim’s efforts to maintain a relationship, overcome his doubts over his current loyalties, and avoid becoming merely a puppet of established politicians.

Readers who accept the premise of the book will find Tim a sympathetic protagonist, striving to balance the concerns of a teenager with the duties and risks of political station. However, those unfamiliar with Distant Horizon might find his willingness to accept the forced genetic manipulation of criminals and innocents alike to be either implausible or off-putting.

The supporting cast are well-crafted. Fellow members of the Camaraderie appear pleasant and helpful enough to support a well-intentioned protagonist siding with them, but also display a ruthlessness that fits with an organisation that would transform humans into biological machinery. Those few characters Tim encounters outside the Camaraderie are plausibly antagonistic, adding to the feeling that the current rulership isn’t the worst option.

Overall, I enjoyed this book. I recommend it to readers seeking a fast-paced excursion into young adult dark fantasy.