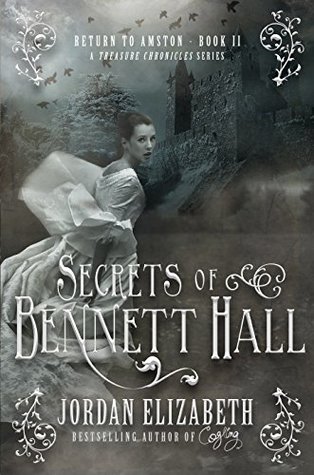 Merging the subtle horrors and uncertain evidence of Gothic novels with modern language and focus, Elizabeth creates a tale that will appeal to lovers of both classic and modern horror.

This novel is the second in the Return to Amston series, and follows the Treasure series. So, spectres of the past might lurk ahead.

When she was young, Adelaide Dinsmore’s insistence that she’d lived another life caused her to be committed to an asylum. After being declared cured, gaining her teaching qualification, and moving to the newly opened West, she believed the darkness was in her past. Until the mysterious death of a student forces her to return home and to accept a place as a governess at Bennett Hall. Theodora, her charge, is a delight and the Bennetts are pleasant—if distant. However, conflicting evidence about the fate of her predecessors, mysterious noises in the night, and unexpected reactions to places and people she’s never encountered before make her question whether something is deeply wrong at Bennett Hall; and whether her childhood beliefs are madness or salvation.

Elizabeth provides many of the classic tropes of Gothic horror: a protagonist who isn’t certain of their sanity, a noble family with a mysterious past, odd happenings that leave no evidence, a sprawling mansion with abandoned rooms, trusted retainers with uncertain motives, a naïve love interest mired in duty. Readers who have felt the fear of wallpaper will find many visceral thrills here.

However, the writing is in a modern style, making this book accessible to readers seeking a less dense read than the classics to which it pays homage.

As befits a Gothic novel, the pacing is measured and the plot filled with events that could bear more than one interpretation. However, Elizabeth provides a series of minor revelations that while potentially unexpected, seem—in hindsight—almost obvious; as such readers are unlikely to find the narrative tedious.

The final reveal and dénouement are skilled examples of the genre; as such readers familiar with the tropes might suspect some of the truth in advance; however, the nuances of these areas are engaging enough, this is likely to come as a pleasing arrival rather than a bathetic end.

Interwoven with the building horror is a thread of equally classic cross-class romance. In addition to providing a second plot line, this contrasts with the darkness that fills the Hall and introduces both an ally for Adelaide and a greater reason for her to conceal the stranger events for fear of seeming odd.

While this novel is set after a number of Elizabeth’s other works, there are few references to the events of those and no reliance upon them; therefore, the book can easily be read as a stand alone.

Adelaide herself is an engaging protagonist. Although both social status and history constrain her actions, she remains active—even when doubting her own senses. This balance makes it plausible that she would neither unravel the mystery faster nor simply leave while permitting a consistent sense of progress.

The supporting cast are equally interesting. While each bearing recognisable traits of Gothic stock, providing the reader with a strong image of them from the start, they also display unique details that prevent them being mere stereotypes

Overall, I enjoyed this novel. I recommend it to readers seeking a classic Gothic narrative rendered in modern prose.