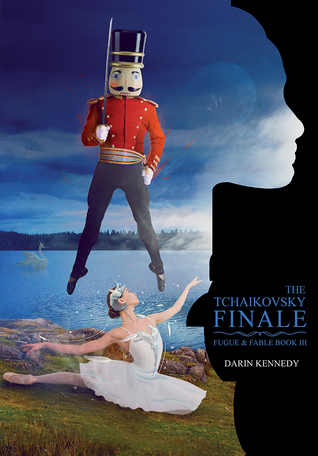 Kennedy turns his mix of symbolism and realism on two works of Tchaikovsky, creating a tale filled with bleak situations, looming threats, and flawed protagonists but also strange beauty.

This novel is the third in the Fugue & Fable series. Beyond this point, dance spoilers.

Following Mira Tejedor’s second psychic battle with the devious Madame Versailles, Anthony Faircloth and the innocents caught up in his mindscape have been freed. However, the struggle has left Mira comatose. Filled with guilt, Anthony resolves to do for her what she did for him: solve the psychic drama that keeps her trapped. The link they share lets him enter; but as he moves through worlds created from Swan Lake and The Nutcracker, he discovers being the hero is very different from being the victim; if he is even the hero. And, as Mira’s spiritual death looms closer, a threat from her past approaches in the real world.

As with the previous volumes, Kennedy interweaves the characters’ real lives with psychodramas crafted around the works of a classical composer: in this instance, Tchaikovsky. However, unlike the preceding two books, the narrator has changed from one skilled in psychology to one skilled in the works of Russian composers. This creates a narrative where the protagonist is more aware of how the story traditionally unfolds, including variations, but less aware of how symbols can be used to both understand and resolve mental blocks. Combined with a different set of real world issues, this book avoids being merely a re-treading of the same concept with different ballets dropped in; however, the overall similarity of journeys through a piece of music to defeat a psychic villain is strong enough that a few readers might find it overly so.

Again, as with the previous books, the novel sits between gritty thriller and psychic fantasy, providing some but not all of each. While this does technically create the same risk of not satisfying some fans of each, readers who enjoyed the preceding novels are likely to find the blending of genres a positive rather than negative experience.

Kennedy’s use of the two vastly different sets of genre rules to enhance the narrative is especially noticeable in the passing of time. Each visit to the mindscape separates Anthony from the real world for an unknown amount of time, adding the tension of having lost hours or days to the usual obstacles of a race against time; conversely, the mindscapes move through scenes with the speed and inevitability of a well-known story that can be completed in a few hours, removing even the scant luxury of time common to the real world.

This sense of the plot being beyond Anthony’s control is enhanced by his “roles” in the drama: where Mira had been storytellers and lead female characters, Anthony is the sidekick or supporting figure, more observer of heroism than hero himself.

Anthony himself fits this uncertain role perfectly. After being rescued from two psychodramatic comas—mental prisons that he believes were his fault—he is both aware that he has lived a passive rather than active life, and doubtful that he is a good person. This portrayal of a boy struggling to face a task that has challenged even a skilled therapist feels plausible; however, as with all portrayals of self-doubt, some readers might find the negativity a touch annoying in places.

Where Anthony is perhaps less successful is as a narrator. In several places, he narrates that he’s noticed something or worked out something but doesn’t share what it is, only for that to later be a key factor in turning a situation to his advantage. While this will not be an issue for readers who enjoy watching a protagonist triumph after a series of sudden twists and reversals, those embracing the premise that the musical worlds are a puzzle to be solved might feel as if Anthony—and thus Kennedy—has withheld something purely to be able to make something seem worse or more complex than it is.

The returning cast display a good balance of familiarity and development. After witnessing two prior psychodramas, they each believe in the power; however, they also each have developed more opinions on what is and isn’t viable and what is or isn’t an acceptable risk.

Overall, I enjoyed this book. I recommend it to readers who enjoy magical realism or quirky thrillers with unreliable narrators.