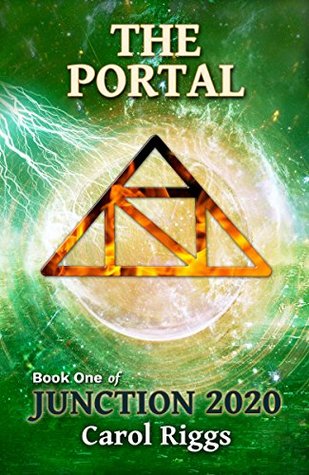 Mixing an intriguing variation on characters mysteriously transported to another world with an immediately recognisable portrayal of teenage brittleness, Riggs provides a decidedly young adult tale on the border of science-fiction and fantasy.

Mari Stratton doesn’t especially like Stephanie, but doesn’t dislike her enough to miss her New Year’s Eve Party. However, what starts as the typical mix of teenage posturing and petty squabbles turns serious when Mari, Stephanie, and several other party goers are sucked through a portal into a fantasy realm. Surrounded by a world that seems at turns familiar and incomprehensible, treated like a near slave, and pursued by ruthless, black-cloaked riders, how will Mari find her way home?

Riggs opens with several chapters of Mari preparing for the party, bickering with her brother, talking with her friend Lauren, and describing the mundane events of the party. Depending on each reader’s view on the daily struggles of teenage life, this will either draw them straight into Mari’s situation or start to feel a touch like a checklist of YA heroines.

Whichever way readers see this opening, it does create a pleasing contrast with the transition into another world and the subsequent oddities. Making good use of distrustful villagers and the constant pressure of pursuit, Riggs plausibly denies her characters both information and time for calm consideration; combined with first-person narration, this creates a picture of world and events that have an underlying coherence without either revealing the answer straight away or withholding evidence for the sake of it.

Although this struggle to understand is plausible for the characters, some readers might find the answers come too slowly to overcome their incredulity. Once revealed, the explanation for so much of the world seeming familiar to Mari makes sense, and has the added frisson of not being the obvious one; however, until this answer comes, the repeated similarities with things she’s read, seen, or dreamt challenges the sense the world is real rather than imagined.

While this novella does have a complete arc and does explain the most pressing questions, it also ends on an almost cliff-hanger with several large questions unanswered; as such, it might leave readers feeling that the story cuts off rather than offering closure.

Apart from the mysterious familiarity with parts of the world—something that increases Mari’s fear more often than it solves problems—Mari is very much not the chosen one; unlike many YA protagonists, she lacks exceptional physical or mental abilities, or unusual life experiences. This makes her struggle to overcome obstacles both more nerve-wracking and more plausible.

However, she does display the constant focus on her self-worth that teenage chosen one’s often possess. Without great beauty or other traits to give a lie to her doubt, this has less potential to irritate; however, some readers are likely to find her repeated thoughts about her father’s dismissive response to her life choices tedious.

The teenagers transported with Mari display an equal sense of being ordinary teenagers rather than individuals selected for their prowess. Unfortunately, Riggs does not really exploit this lack of experience: pampered teenagers seem to find peasant labour mildly tedious rather than exhausting; imprisonment in a dank cell without food has no effect on insouciance. While this book is Mari’s story—with later volumes said to follow another of the characters—the supporting cast display very little development across the narrative.

Overall, I enjoyed the concept behind the world greatly but found the characters a touch flat. I recommend it to readers who love young adult tales.