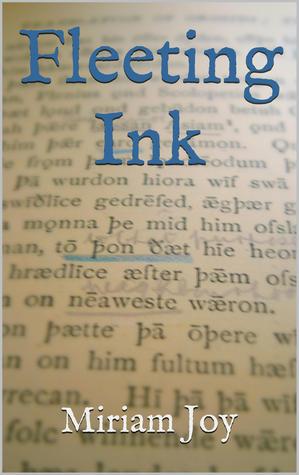 Joy weaves together hymns in praise of feeling rather than deconstructing poetry with evidence that words cannot be other than a structure around anything of actual meaning, elegantly capturing both the power of language to show reality and its failure.

This collection contains twenty-nine of Joy’s poems inspired by the concept of writing.

The eponymous opening addresses a topic familiar to anyone who has tried to write: writer’s block. Capturing vividly the way a blank page claws at a writer while offering no guidance for what to write or how to write it, the poem heads to the somewhat happy conclusion that the harrowing experience of writing while fearing the words are inadequate is followed by a realisation that the passion expressed behind them is good, and the words aren’t that bad either.

Blank pages dare me to create.
They want to be despoiled and marked,
ruined by ink in my changing scrawl.
They want words – and never mind
that I have none to offer.

This idea of poetry being most valid not in the careful placement of perfect words in soaring structures continues through the collection, finding a certain humour in the self-deprecating descriptions of various verse-forms in ‘Crumbling Metre’, before rising to an impassioned rejection of literary-critique-as-truth in ‘The Hearts of Dead Poets’ (a poem that, ironically, is filled with carefully crafted references to other poets and followed by an explanatory note, making it potentially the most literary of the collection).

You can search for the meaning,
take apart every line until words
lie dismembered across pages you slice
with an analytic, murderous pen,
but in the end why bother looking?
Without heart, what does it matter?

The Hearts of Dead Poets

However, this message of emotion granting poetry purpose does not go unchallenged: both ‘Represent’ and ‘Empty Words’ portray the ultimate failure of language to show much of what a person feels.

A similar contradiction exists between ‘Observing the Revolution’ and ‘Sympathy from a Poet’: one showing a world in which verse raises up the spirits of the downtrodden; the other admitting that words can never lift the burden of an imperfect world.

This dynamic tension between emotion and meaning on the one hand and poetry merely being hollow structure on the other is most bleak in ‘Despoiled’ which contrasts the poet’s re-evaluation of effort shown in ‘Fleeting Ink’ with the book that has now received the ink it sought becoming something only of interest to those interested in the poet; and only passing interest at that.

The inelegant, awkward prose
breaks off;
a certain date after which
there are no more entries, and you know
that I gave up writing a diary.

As Joy states in their introduction, poetry is often about love. And several of these poems, taken for their emotional content rather than viewed through the lens of them being “about writing”, feel like love poems. However, as with the exploration of analysis vs emotion, these are not joyful paeans or mushy declarations; these are images of absence feeling more real than presence, of neither a relationship nor its absence allowing comfort.

Conversations of nothing defy my words,
unification of hopes has no symbolism.
A clasped hand is a metaphor, but this
is a high-five, a celebration, and prose.

Underlying the threads of discomfort with the right way to read a poem and what a poem can even express are hints of a broader tiredness: a rejection of the very idea of there being certain ways a person should experience the world that is likely to resonate with any reader who does not accept that logic is the most civilised guide, that romantic love is necessary, or even that there is a common reality.

While poetry, as one of the theories Joy supports and refutes states, can be distinguished from a series of words not set out normally by the message, this collection does not rely upon meaning, whether felt emotionally or inferred critically. Joy also provides language that is pleasing simply for itself.

We harmonise like deaf children:
with utter confidence and no proof,

Of course, as with a juxtaposition of comedy and horror, the beauty of the phrasing at times makes the bleakness of the images starker by comparison.

I enjoyed this collection immensely, and reread it immediately after finishing it. I recommend it to everyone; whether they write or create in any way, or not.