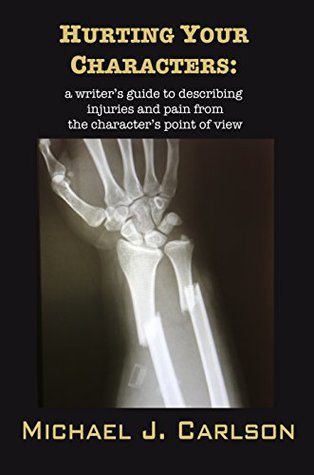 Carlson combines an accessible overview of the human body and the damage it suffers from various traumas with insight into how that might feel to a character. This creates a useful framework for adding plausible and emotive descriptions of injury that can be tailored to a character’s knowledge.

This book provides an simplified description of the immediate and longer-term consequences of injury on the human body along with guidelines on how that translates into a character’s subjective experience.

Carlson’s description of human biology and trauma—while not without some dryness—only goes as far into specialist terminology and minority cases as is needed to provide context for what a character will experience. The objective descriptions are also, in many cases, provided in small doses followed by guidance on how to describe the feeling in emotive terms. As such, readers with no medical experience are likely to find the content a good balance between scientific rigour and easily understandable tools.

In addition, Carlson lists websites, books, and other resources inline with the relevant text, at the end of a chapter, or in a bibliography at the end. Therefore, readers who want to include a more obscure or nuanced situation in their work are offered a convenient starting point.

To further mitigate the risk of tedium, Carlson peppers his prose with humorous asides and popular culture references. Although these do avoid the text being mostly a recitation of names and numbers, they might also challenge some readers’ sense that Carlson is an expert. For example, mentions of urination are often followed by a parenthesis about whether he can say that, which seem to conjure the image of a pre-teen giggling about naughty words or a C19th maiden aunt more than someone with extensive medical experience.

The text contains no illustrations or diagrams. While the description is clear enough that readers will probably not feel a strong lack, this might make both the process of comprehension and retention less swift. However, it does also avoid any potential confusion due to loss of colour or size on certain ereaders.

While the information and guidance contained in this book is delivered in an accessible fashion, accessing it is less so. The meat of the book begins with a brief overview of the human body, followed by a discussion of minor injuries. The next chapter, about the head, opens with the statement that it’s starting at the top. This sense of downward progression is strengthened by the following chapter being about the spine. However, this apparent directional flow through the body does not continue in subsequent chapters, leaving the reader without an instinctive feel for where the trauma they seek might be.

This lack of a gut-feeling for where to look would not be an issue, except that the contents pages, both inline and NCX (the one that many ereaders display when a reader hits the ‘Go To’ or ‘Contents’ button), only list chapter numbers rather than chapter contents. As such—unless a reader already knows which chapter they want—finding a specific injury or fact might require several blind leaps to chapter starts.

Further to the issue of unlabelled chapters, the use of headers is quite flat, so a section describing a new trauma is often headed in the same way as a subsection within a more complex or varied trauma. Thus, even once a reader has found the right chapter, the text does not aid skimming to the right area.

As such, while Carlson’s statement that the book is not suited to reading cover-to-cover without risking mental fatigue is true, readers are likely to benefit from reading the book through once to gain a basic memory of its structure.

Where the failure to take advantage of the features of ebooks for internal navigation is likely to be an irritant, the same failure in respect of hyperlinking creates a major obstacle. Some of the references Carlson provides are long hyperlinks which are rendered as plaintext rather than code. If a reader is using a device that allows both effortless copy-and-paste and has a good browser on it, then this might not be a major issue; however, other readers are likely to find copying a string of numbers and letters that breaks over eight lines from their ereader to their browser to be a significant annoyance.

Overall, I found this a useful technical resource that lacks a number of very useful navigation features. I recommend it to writers looking to make their subjective description of injury and its consequences more plausible.

I received a free copy of The 2017 NaNoWriMo Writing Tools Bundle, which includes this title, from one of the contributors with no obligation to review.