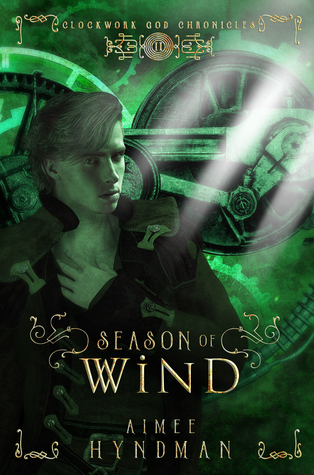 Hyndman combines the complexity of epic fantasy with the character focus of young adult fantasy, providing a sense of depth and scope without sacrificing accessibility or the reader’s wrists.

This is the second volume in The Clockwork Gods Chronicles. So, spoilers ahead.

Having completed the deal she made with Itazura, the god of mischief, Janet Redstone wants to focus on her own concerns and avoid the fast-approaching war between the current gods and the Elder Gods they replaced. Unfortunately, with her friend Sylvia’s soul stolen by one of the wendigo that serve the Elder Gods, Janet’s search leads through the deserts of Kabila where many have readopted the old religion. Between the threat of ravaging wendigo packs and the chance that any of the people she meets could be an informant, things are tricky enough; then Janet starts displaying odd advantages, such as locks just opening for her, and dreaming of Itazura imprisoned in darkness.

The novel opens in the middle of events a short while after the previous volume. As such, readers coming to it with only a short break will not find their momentum slowed by prologues or reprises; however, Hyndman does include an amount of framing and explanation where it fits naturally into thoughts or conversations, so readers less immediately familiar with the previous volume have the reminders they need.

While this balance is likely to work well for any continuing reader, and makes for more plausible conversations, the reminders are designed to trigger recall of rather than replace matters from the first volume. As such, large areas of cosmology, metaphysics, politics, and other matters are assumed, making this book less appropriate as a stand-alone or entry-point into the series.

Continuing the time associations, Hyndman expands on the idea of the previous gods, defeated but not destroyed, being seasonal rather than hourly. While there is less focus on the impact this correlation with have on performing tasks at particular times, there is an underlying flavour of the seasons to each encounter with an Elder God’s base of power. In addition, the twelve hours of the clock are compared to the four quarters of the year, making each Elder God a gestalt of three of the current gods; but not necessarily the three one might immediately suspect.

Hyndman adopts the same re-framing rather than radically expanding approach to the steampunk elements: the technology still forms a large part of both the world and the narrative, but appears more as a new application of things already present than as the result of radical concepts.

With Janet having interacted extensively with gods in the previous volume, the presence of a high-powered metaphysical thread is almost inevitable. However, Hyndman resists the temptation to escalate dramatically, instead displaying a world that is changing but keeping the immediate impact on the protagonists at a level similar to that of the previous book. Hyndman additionally makes full use of the disparate obsessions inherent in any pantheon to grant the gods a plausible amount of power but limit the application through disputes and lack of broader awareness.

Janet remains a complex and sympathetic character. Experience and a greater purpose have made her less naïve, but her upbringing as one of the disadvantaged still colours her perspectives on the ultimate 1%: the gods. The interplay between having seen a few gods as more than embodiments of privilege and years of being on the losing end of the system makes her at turns more able to demand they work for the greater good and less able to set her own feelings aside.

While there are a few stereotypes among those characters with the least page time, the supporting cast are similarly nuanced.

Overall, I enjoyed this novel greatly. I recommend it to readers seeking fantasy with the immense scale of epic fantasy but without the immense length and convolution.

I received a free copy from the publisher with a request for the fair review.