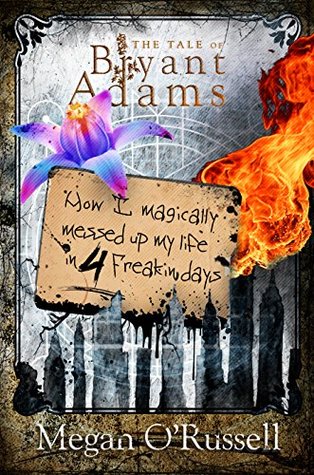 Bryant Adams is an ordinary teenager with ordinary teenage problems, like having divorced parents, crushing on the girl who sits next to him in half his lessons, and having his mother teach drama at his school. And, between his best friend being a hit with women of all ages, his mother wanting to set him up on a date, and keeping visits to his father’s flat a secret, his free time seems just as filled with serious problems. Until he finds a magical cellphone and discovers that he didn’t know what problems were.

O’Russell opens with a portrayal of teenage life that will be immediately recognisable to readers familiar with US teen drama, YA fiction, and – potentially – actually being a US teenager in the post-smartphone era. While this does include long-term unspoken attraction and fixation on other objectively minor matters, O’Russell provides enough reason for Bryant to not have addressed matters that even readers less interested in the trials of youth are more likely to feel sympathy than the desire to knock sense into anyone.

The trust in description that this establishes both makes the later revelations of Bryant’s past and the existence of magic seem more believable, and creates a stronger contrast between the mundane and mystical. This in turn allows O’Russell to maintain the absence of intelligibility that characterises the most interesting systems of magic while leaving the reader feeling that there is an underlying truth.

In contrast to the metaphysics of the world, both the practitioners of magic and their spells are decidedly practical: although the possibility of McGuffins isn’t ruled out, there are no Barkeresque ancient sorcerers pursuing artefacts for the sake of possessing them or Powersian spells that turn pennies over on Lammas Eve; only the classic fireballs, force-blasts, and wind shields of high fantasy integrated into the modern age. This practicality is especially present in O’Russell’s use of a smartphone as the replacement to the dusty tomes and arcane tools of the classic wizard.

As befits a fusion of smart but uncool teenager with magical smartphones, there is a strong thread of humour – both observational and slapstick – throughout the novel. However, this is balanced by an equal thread of actual threat, making each stronger by contrast.

Bryant is an engaging protagonist. He is, as with almost all YA fantasy heroes, more special than average and unaware of it; however, the advantages he has come with more than trivial downsides in the life of the ordinary teenager or are things he had no way to discover, so his transition from misfit to victor feels like following someone’s successes rather than watching someone oblivious to their privilege.

The teenage supporting cast exhibit an objectively reversed but structurally parallel transition: their apparent social success at the beginning grows through the revelation of weakness into a more realistic and sympathetic character.

However, the greatest triumph of character might be in the adults. Unlike some YA stories, adults display both greater maturity and greater ability than Bryant in most circumstances: while he might or might not be destined to be a great magician, he is no Chosen One surrounded by fools; but rather a significant participant in plans that benefit equally from the experience of others.

Overall, I enjoyed this novel. I recommend it to readers seeking urban fantasy with a young adult perspective.