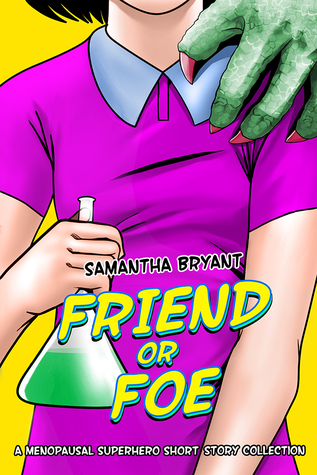 Combining diverse characters with the comic book action, Bryant creates a series of tales of realistic people in a world of superhero physics.

Then, when the reader looks at the review, my mechanical squid drops the spoiler bucket over their head!

Bryant opens the collection with a short introduction that places each story within the arc of the novels. This includes a warning that readers might wish to read the appropriate novel(s) before the later stories. While Bryant does seek to avoid obvious spoilers within this introduction, her entirely reasonable decision to include a small amount of context for those readers who are not familiar with the novels does mean that astute readers wishing to avoid any spoilers will need to put even the introduction aside temporarily.

As with all collections that fill in the spaces between existing works, it is hard for a single reviewer to assess accurately whether the stories both stand on their own for readers who have not read the novels, and maintain tension and freshness for readers who have. However, Bryant’s choice to not provide vast swathes of backstory in the works and use the introduction to provide context, skilfully balances not confusing new readers with not boring established ones.

Perhaps ironically, the sense that these stories are tales in themselves feels slightly weaker in ‘Intervention’, the story set before the first novel. While it is a complete arc, the sight of a youthful Cindy and Patricia starting along the road toward the first novel is likely to resonate less with those readers who have not been immersed in the modern Cindy and Patricia.

As with Bryant’s other works, these stories focus on complex people with real lives who also have powers rather than superheroes who face only the challenges of the young, rich, or single.

While there is a decided slant toward Patricia (who features as a major protagonist in every story) and to a lesser extent Cindy, the other main characters also feature in two of the stories so even those readers who find Patricia’s powers and life the least interesting aspect of the world will have plenty to hold their attention.

Overall, I enjoyed this collection. I recommend it to readers who are interested in the human side of superhero tales.

One thought on “Friend or Foe: A MenoPausal Superhero Short Story Collection by Samantha Bryant”